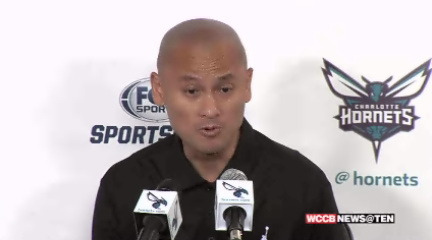 Charlotte finished the season shooting a miserable 31.8% in 3Pt-FG percentage–dead last in the NBA.

“We’re going to address (shooting) this offseason,” Cho said. “Whether it’s through the draft, through free agency or through a trade.”

The good news for Cho and the Hornets, they believe there is depth at the small forward position.

Some mock drafts have small forward Stanley Johnson out of Arizona being a potential target for the Hornets. Johnson, 19, shot 37% from the outside last year.

Cho did not name any draft prospects by name as to not tip his hand. The team has held eight pre-draft workouts at their practice facilities so far with a ninth one scheduled for Friday morning. Additionally, the team has attended various workouts across the nation.

“Right where we’re picking, the draft is deep at the wing spot and with the bigs,” Cho said. “We think we will get a very good player at nine.”

– When asked about building around Al Jefferson for the long-term, Cho said the future of Jefferson is up to which Al Jefferson ‘shows up this year’. Cho was pleased with Jefferson who played in 2013-14 but said he was disappointed with the injuries and production from Jefferson this past season.

– When asked about shipping Lance Stevenson out of town after a single season with the team, Cho admitted that ‘not only transactions work out’.

– Cho did not rule out making a qualifying offer for center Bismack Biyombo. He says that decision may depend on who the Hornets take in next week’s draft.