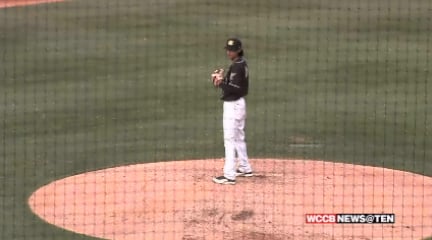 Charlotte right-hander earns the win in his second-career Triple-A start.

(UPTOWN CHARLOTTE, NC) – A night after setting season-highs in both hits (15) and runs (15), the Charlotte Knights used pitching to extend their winning streak to five games with a 3-0 victory behind Terance Marin in his second-career Triple-A start.

Marin (2-0, 0.00) began the season on loan by the White Sox to Toros de Tijuana of the Mexican League, but has been nothing short of sensational since returning to the states. The 155-pound right-hander from Modesto, California scattered four hits over seven scoreless innings on Friday night, earning his second win in as many starts to begin his Charlotte Knights career. The 25-year-old also has one relief appearance this season, but has yet to allow a run in 15.0 innings pitched.

The Knights starter out-dueled Indians hurler Adrian Sampson (6-5, 3.39), who was saddled with the tough-luck loss despite allowing only one run on three hits over seven innings pitched.

The one run scored on Sampson was a solo home run in the bottom of the fourth inning by Knights shortstop Tyler Saladino – his first of the season. Saladino led the offensive attack on Friday night with three of the team’s six hits and two of the team’s three RBI in the game.

The Knights scored again in the eighth inning when Chris Marrero, Micah Johnson, and Saladino tallied three-consecutive two-out singles off of RHP Blake Wood to score a pair of runs and give the team a 3-0 advantage. Marrero was one of two Charlotte batters to contribute a multi-hit game, and the Miami, Florida native has now hit safely in three of the first four games of his Knights career.

After Matt Lindstrom hurled a perfect eighth inning, Zach Phillips was called-on to record the final three outs of the game. A night after having his nine-game scoreless-streak snapped, the lefty reliever began a new streak with a scoreless ninth inning to earn the save – his fourth – and complete the Knights sixth shutout of the season.

The five-game winning streak ties a season-high for the Knights and the team will look to set a new high on Saturday night as RHP Kyle Drabek takes the mound for Charlotte against RHP Angel Sanchez in the 7:05 p.m. matchup. Saturday night brings another KnightinGals performance, presented by Hickory Tavern.