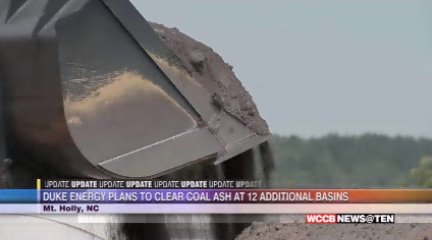 CHARLOTTE, NC — An up-close look at Duke Energy’s efforts to clean up millions of tons of coal ash lining waste pits across the state.

We watched crews load trucks with the ash Tuesday at the Old Riverbend Coal Plant in Mount Holly.  The ash will be driven to a lined landfill in Georgia.  Duke Energy says it now plans to clear the ash from 24 power plant basins.  They’re also testing the ground water at each basin.

“From what we see with groundwater now, the impact seems to be minor,” said UNC Charlotte Department of Civil and Environmental Engineering John Daniels.  “And what challenges this is the fact that if you look at drinking wells statewide, in a majority of the cases, you’re going to have at least one constituent that’s at a level above groundwater standards.”

Duke retired the Riverbend site in 2013.  About four and a half million tons of coal ash are stored there.