Wilson Drops in on the Crew at the Matthews Fire Department 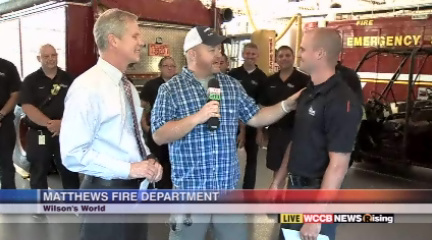 CHARLOTTE, N.C. – Wilson stopped in at the Matthews Fire Department this morning to talk about fireworks safety for the upcoming 4th of July holiday.  But before he got started on the topic he was there to discuss, he invaded their kitchen and enjoyed a little breakfast.  Apparently crunchberry french toast is a breakfast favorite for these guys and ketchup on french toast is a favorite for Wilson.

While he was there, he was joined by Hazen Blodgett, Matthews Town Manager, who presented firefighter Jimmy Mengel the 2014 Employee of the Year Award for the Town of Matthews.  Jimmy was the point man, along with his fellow firefighters, on a project to start a program with Crown Point Elementary that would get kids to reading.  The program was a huge success and  they hope to get more schools involved with it in the future.  Wilson was with the kids after this year’s program was over when they received their prizes and took their ride in the firetruck.  Check out the story HERE.

And with July the 4th coming up this Saturday, it was important to discuss fireworks safety.  He was given some tips by Lt. Bill Davis on how to have a fun, but safe 4th.  Lt. Davis also let us know which fireworks are legal in North Carolina.