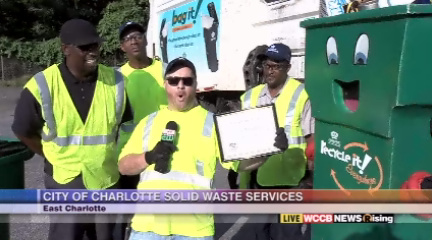 CHARLOTTE, N.C. –  Wilson always talks trash, but today was exceptionally trashy as he began his morning in a recycle bin outside the City of Charlotte Solid Waste Services.  Does he remind you of someone…or rather something you have seen before?

But the trash talk was on when he went head to head with Victoria Johnson, City of Charlotte Solid Waste Services Director in a recycle competition.  Seems like there was a little more than trash talk going on there Wilson.  But thanks to Recycle-Nator for referring the competition.

But when they finally did get down to business Victoria and Wilson talked about some of the changes coming to Charlotte’s recycling program.  As of July 6th, they will no longer collect recyclables that are not in a city issued 95 gallon roll out cart.  To find out more about the city’s new regulations for curbside recycling and what items can be recycled, go to curbit.charlottenc.gov.

The guys at the department gave Wilson a preview of how the new curbside system will work.  And they even let him behind the lever to do a little curside service of his own and he received an Honorary Green Card and is now official to jump in the truck and help out.