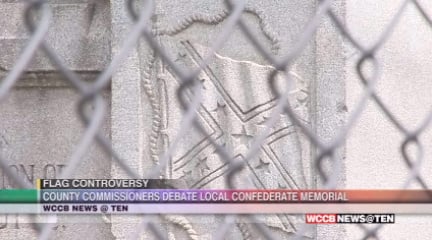 CHARLOTTE, NC — The debate over the Confederate flag is spilling over to monuments and memorials associated with the Civil War found across Charlotte and Mecklenburg County.

Mecklenburg County Commissioners discussed a monument to Civil War veterans that sits on county property at Memorial Stadium. The granite marker was put up in 1929 with the phrase: “They preserved the Anglo-Saxon civilization of the South and became master builders in a re-united country”.

“Clearly this monument espouses hate through its statement encouraging white supremacy in our regional society,” said Charlotte resident Chris Painter.  “The language of that stone monument is enough to justify its removal.”

“I believe that monument should stay where it is, because once you move one monument I don’t see how you’re going to stop people from wanting to move every other monument,” said Charlotte resident Joseph Turner.

The Confederate monument at Memorial Stadium is just one of several across Mecklenburg County.

Dr. Tom Hanchett with the Levine Museum of the New South says these memorials represent only a part of the county’s Civil War experience.

“About 40 percent of us here in Mecklenburg County on the eve of the Civil War were African-American, almost all of them enslaved. Did those people embrace the Confederacy? They’re Southerners. They are part of who we are,” said Tom Hanchett.

County Commissioners were not voting on any action regarding the monument at Memorial Stadium.