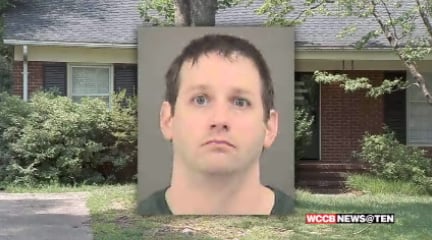 CHARLOTTE, NC — New details are emerging in the case of a Big Brothers Big Sisters of Greater Charlotte volunteer accused of sexually assaulting a child he mentored.

38-year-old Ryan Hill will be in court for the first time Wednesday after CMPD arrested him on nearly 20 charges of child sex crimes.

For four years, police say a mother trusted her son with Hill until her 16-year-old came forward with stories of repeated abuse.
“They look up to these people,” said Larry Sargent. “It’s just terrible, and it crosses all lines.”
Sargent lives just steps from what’s listed as Hill’s home. That’s where the teen says some of the
abuse occurred.
The non-profit matched Hill with the teen, who police say does have a mental disability, when the child was 12 years old.
Two years in, the teen told police the sexual assaults began.
“When you have an individual who’s been placed in a role where they have a position of trust, to mentor a child, and to take advantage of that, certainly a disappointment,” said Capt. Jacquelyn
Hulsey. “It’s a shock to the conscience of the public.”
Capt. Hulsey says the reason the teen came forward Thursday, years into the suspected abuse, is case sensitive.
By Monday, CMPD searched Hill’s home to cross-check the child’s information. Detectives arrested Hill for eight counts of Statutory Sex Offense and 10 counts of Indecent Liberties with a Minor.
They say Hill refused to answer questions.
Police won’t reveal Hill’s day job because it doesn’t involve children.
Capt. Hulsey says it’s not clear if he exploited the organization to access children.
“I certainly hope the organization doesn’t suffer from something like this,” said Sargent.
Chief Executive Officer of Big Brothers Big Sisters of Greater Charlotte Karen Calder tells WCCB Charlotte in a written statement:
“Big Brothers Big Sisters has a zero tolerance policy toward abuse or exploitation of any kind.
We were saddened and deeply concerned to learn of the arrest of an individual who was affiliated with our organization as a volunteer.   Big Brothers Big Sisters makes child safety our priority.
Our volunteers and staff undergo thorough screening and background checks. Big Brothers Big Sisters’ professional mentoring support staff have ongoing and regular communication with volunteers, mentees and their families and are trained to immediately make law enforcement and child protective services authorities aware of any reports of abuse or exploitation and fully cooperate with any investigation into such reports.”
Hill had no criminal history.
Big Brothers Big Sisters did not return calls to answer if this is the only child Hill has mentored. However, police do not suspect any other victims.