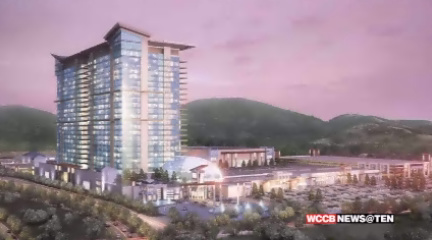 KINGS MOUNTAIN, NC – Gambling addiction, poverty, drugs and crime. The list of cons goes on and on for residents trying to fight plans for a multimillion-dollar casino in Cleveland County.

“Homelessness, bankruptcy, crime, suicide, child abandonment and child neglect. That’s what happens and it’s not a matter of if, it’s when,” said Litchfield.

The Catawba Indian Nation is proposing a 220,000 square foot resort and casino off I-85 in Kings Mountain and Dixie School Road.  Developers say the casino would bring an estimated $349 million into the area each year and create more than 4,000 jobs.

“They don’t manufacture dollars, they take dollars.  If they create $350 million at that casino, that’s $350 million that they took from the community,” said Adam Forcade, founder of the Kings Mountain Awareness Group.

Developers point to the impact of Harrah’s Cherokee Casino. With 3.6 million visitors a year, it’s the largest private attraction in North Carolina. Visitors spent about $386 million at Harrah’s in 2010, and 70 percent of visitors were from out-of-state. The latest economic impact study reports Harrah’s pays $74.8 million in wages and salaries to its approximate 1,674 employees. The casino’s staff makes up 5 percent of the work force in Swain and Jackson Counties.

The National Coalition Against Legalized Gambling reports that bankruptcy rates and gambling addictions go up in casino communities, and local business sales drop significantly. The Catawba Indian Nation is waiting on the federal government to approve or deny the tribe’s application to put the land into federal trust. The tribe tells WCCB Charlotte it has not been given a timeline on that decision.