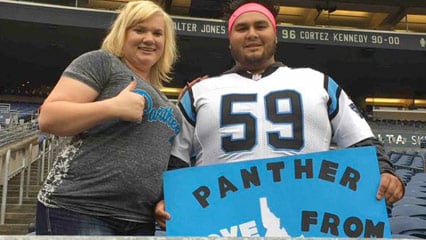 I sincerely apologize to Panthers fan @tmendoza73. Love your dedication to the team; so sorry my words hurt you

SEATTLE, W.A. — An ESPN reporter who covers the Panthers is getting called out on social media for a tweet he sent before the Panthers game in Seattle.

ESPN’s David Newton posted the following tweet on his Twitter account after asking permission to take the photo of the fans. It’s the comment about the size of the fan’s jersey that has Panthers’ fans upset.

The fan in the photo responded to the tweet saying how disrespectful Newton’s tweet was and how ESPN could allow an employee to disrespect a fan.

This is disrespectful we allow you to take our picture and you insult me on social media. @DNewtonespn https://t.co/DExAvohK7N