The District Attorney’s Office released a statement Monday saying that CMPD officers Michael Bell and Garret Tyron were justified in the deadly shooting of Rodney Smith on June 2nd.

According to their investigation, the DA says the officers used “deadly force in self-defense under the laws of North Carolina” when they returned fire and killed Smith.

The statement also says that the letter does not specifically address issues of tactics, correct police procedure, or CMPD Directives.

CMPD has released the identities of those involved in Thursday night’s fatal officer involved shooting.

The officers have been identified as Officer Michael Bell and Officer Garret Tyron.

The suspect killed in the incident has been identified as 18-year-old Rodney Smith.

Investigators say Smith and the victim on the CATS bus did know each other and the shooting on the bus was not random. They also say Smith fired at least one shot at officers, and officers fired multiple shots back.

Chief Kerr Putney issued the following statement on the shooting, “The heroic actions of these officers very likely protected other members of our community from additional harm.  This is yet another illustration of the commitment of our officers who serve selflessly to keep our community safe.”

CATS officials say the shooting happened on a Route 11-North Tryon bus, and any video from that shooting will not be released until CMPD finishes their investigation or authorizes its release.

CHARLOTTE, N.C. — Detectives with the Charlotte-Mecklenburg Police Department are investigating an officer-involved shooting  that happened in the University Area Thursday night.

According to officials, they responded to the 7700 block of N. Tryon Street just after 10:14 p.m. in reference to an assault with a deadly weapon call.  The caller stated that a male victim had been shot while riding a CATS bus and the suspect got off and began walking inbound on N. Tryon Street.  As officers approached the scene they observed a man walking inbound on N. Tryon Street who fit the description of the shooting suspect.  The two officers exited their patrol vehicles, and engaged with the suspect.  They determined him to be armed with a handgun.  During the encounter, they perceived an imminent deadly threat and fired their service weapons striking the suspect. The man died at the scene according to Medic. The officers were not injured.

The initial shooting victim was transported by Medic to Carolinas Medical Center with a non-life threatening injury after being shot in the leg.

As is standard procedure with any officer involved shooting, the Internal Affairs Bureau will conduct a separate but parallel investigation to determine whether CMPD policies and procedures were adhered to during the course of the incident.  Per department protocol, the officers will be placed on Administrative Leave which is standard procedure.

Anyone with information about this incident is asked to call 704-432-TIPS and speak directly to a Homicide Unit Detective.  Detective McKee is the lead detective assigned to the case.  The public can also call Crime Stoppers at 704-334-1600 or visit the Crime Stoppers mobile app website at http://charlottecrimestoppers.com/. 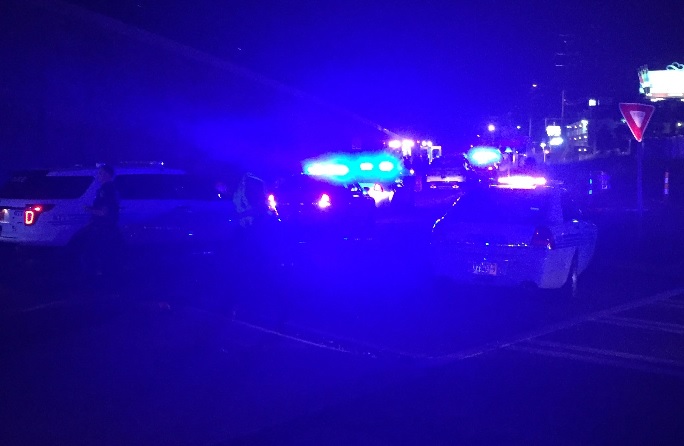 The names of the officers and the suspect have not been released at this time. WCCB News Rising will have the latest information on the shooting, starting at 4:30AM.