Authorities have released the 911 call in reference to a missing baby that was later found with a woman seen walking in and out of traffic along I-77 in Iredell County last week.

CHARLOTTE, N.C. — A woman seen walking in and out of traffic with a baby on I-77, in Iredell County, has been charged with kidnapping after authorities say she abducted the baby from her boyfriend’s family in Charlotte.

The Charlotte-Mecklenburg Police Department says on August 27th, 2018, at about 12:57 p.m., officers responded to reports of a missing child in the 2300 block of Shamrock Drive.

The mother of the child told CMPD officers she left her infant with family members while she ran errands.   At some point, the family members discovered the girlfriend of a family member, 23-year-old Winifred Mirambeau, had taken the baby away from the residence.

At 1:03 p.m., Iredell County authorities responded to reports of a woman walking in and out of traffic with a baby near exit 36 in Mooresville.

Iredell County Sergeant B. Henderson made contact with the woman, identified as Mirambeau, as she was standing on the side of I-77 with the child.  Deputies also located a black Jeep occupied by Xavier Daniel nearby. 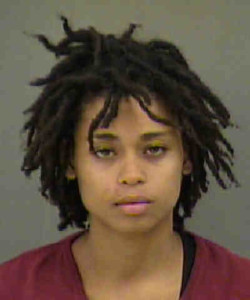 The uninjured infant was taken to Lake Norman Regional Medical Center due to sun exposure and reunited with her mother.

According to Daniel, he was getting into his Jeep on Plaza Drive when Mirambeau got into the passenger side of the vehicle with the infant and told him to drive off.

At some point while they were driving on I-77, Daniel and Mirambeau switched drivers because Mirambeau wanted to drive.  When they got close to exit 36 in Mooresville, Mirambeau exited the interstate into the emergency lane and got out of the vehicle with the infant.

Daniel stated that he then called 911.  Detectives determined Daniel was not involved in the kidnapping.

Mirambeau was transported to CMPD headquarters where she was charged with first degree Kidnapping and Child Abduction following an interview.

The case is still under investigation.

Anyone with information about this incident is asked to call 704-432-TIPS and speak directly to a Homicide Unit Detective.  Detective Carter is the lead detective assigned to the case.  The public can also call Crime Stoppers at 704-334-1600.