CHARLOTTE, N.C. — On Friday, the Charlotte Independence, a United Soccer  League (USL) professional soccer team, announced the retirement of  Independence and South Korean international defender Jungsoo Lee.  Jungsoo’s illustrious, 16-year career was highlighted by stints in the top flight of Korean, Japanese and Qatar leagues, as well as a historical run in the 2010 FIFA World Cup.

“It was fantastic having Jungsoo be a part of the team,” said Independence Head Coach Mike Jeffries. “He’s a really classy individual and a positive guy. Not only was he a good guy within the group but most importantly, we were a better team when he was on the field. His ability to move the ball and make the right decision on the ball, keep plays
going, and to step in and make a defensive play was huge for us.” 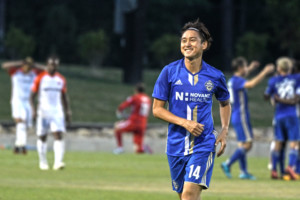 The Charlotte Independence professional soccer team wishes Jungsoo and his family the best of luck in his next endeavor and thanks him for his diligent performances and bright approach on a daily basis. His retirement follows the recent discovery of a medical condition.

“A medical condition came up that we were not aware of and at this point in his career,” said Jeffries. “It made sense that he retire from the game due to that.”

The Independence will next be in action this Saturday, September 29th as the Pittsburgh Riverhounds visits the Sportsplex at Matthews. Kickoff is scheduled for 7:00 PM ET. The match will be preceded by the 4th Annual
Charlotte Fire Department vs Charlotte-Mecklenburg Police Department match at 4:30 PM ET. Tickets purchased for the charity match will benefit the Firefighters’ Burned Children Fund and the CMPD Hope Foundation, and will also gain entry to the Independence match to follow. Tickets are available by calling 704-206-1515 or purchasing
online at charlotteindependence.com.