CHARLOTTE, NC — Police say an associate of the victim in Tuesday night’s west Charlotte shooting has been arrested on an unrelated charge. 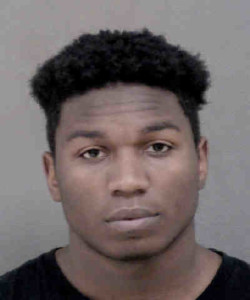 Nazir Lucky, 19, has been charged with Possession of a Stolen Vehicle.

The shooting reportedly happened around 9:47pm in the area of Ashley and Alleghany Street. Police say the shooting appears to have started in the parking lot of a nearby shopping center and spilled over onto the Ashley Street.

A patrol officer reportedly spotted the victim moving slowly down Ashley Street in a Honda Accord with a shattered back window. When he got out to investigate, officials say the victim fired several shots in the air.

CMPD says the officer immediately called for backup but did not fire any shots in response. The officer was eventually able to approach the car and found the 21-year-old victim inside.

The officer rendered aid until the victim could be transported by Medic with life threatening injuries.

At this time, investigators say the shooting appears to have stemmed from an incident at Harding High School. At this time, the victim has not been identified and no arrests have been made.

Police are asking anyone who may have witnessed the incident or has any information on the case to call Crime Stoppers at 704-334-1600 or 911.