“I’m excited to join the Independence,” said Gutman. “While I’m here I want to contribute as much as I can. I want to do everything I can to help the team win. Being a professional brings new goals and new challenges, so I’m putting the Hermann Trophy behind me and trying to achieve new goals.” 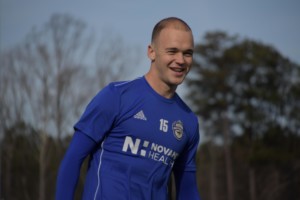 During his senior season at Indiana University, Gutman lead the Hoosiers in scoring and anchored a defensive unit which lead the NCAA in shutouts (14), en route to a Big 10 Championship, Big 10 Tournament Championship and NCAA College Cup semi finals appearance. Indiana has been a top program with Gutman in their ranks, going 63-11-17 (win-loss-draw) since 2015, including an undefeated 2017 regular season culminating in an NCAA College Cup finals appearance. In his four year collegiate career, Gutman scored 20 goals, logged 17 assists and made 90 appearances, as well as, being named NCAA First-Team All-American, Big 10 Defender of the Year and TopDrawerSoccer.com National Player of the Year. The product of the Chicago Fire youth academy competed for USL League Two side Chicago United FC in 2016.

“It’s absolutely fantastic to get Andrew,” said Independence Head Coach Jim McGuinness. “He’s everything that we’re looking for, with his energy, his dynamic ability and his attacking mentality. You want guys with a good attitude and a natural work ethic and I think he’s got all those things.”

Since completing his collegiate career, the 22-year-old has been playing in Scotland on trial for Rangers FC. Gutman signed a three-and-a-half-year contract with Celtic on January 31st. New Independence Head Coach and former Celtic U-20 assistant, Jim McGuinness is excited to expand the relationship with Celtic Manager Brendan Rodgers and his club.

“We’ve got a strong connection with Celtic and obviously, I spent a number of years there,” said McGuinness. “Building a relationship with a world-renowned club like that is very exciting. We want to add more players to that, as well.”

“My goal is to get back to Celtic,” said Gutman. “Having Jim [McGuinness] here, he knows the Celtic way very well. I’m excited to learn under him, so I’m looking forward to getting the season going.”

The Independence will return to USL Championship action on Friday, March 15th for the 2019 Season Opening Game versus Indy Eleven at the Sportsplex at Matthews. For more information on 2019 Season Memberships, please visit charlotteindependence.com or call the Independence front office at 704-206-1515.