Zion In Action As NCAA Tournament Wraps Up First Round

The spotlight of the NCAA Tournament shifts to Zion Williamson and No. 1 overall seed Duke. 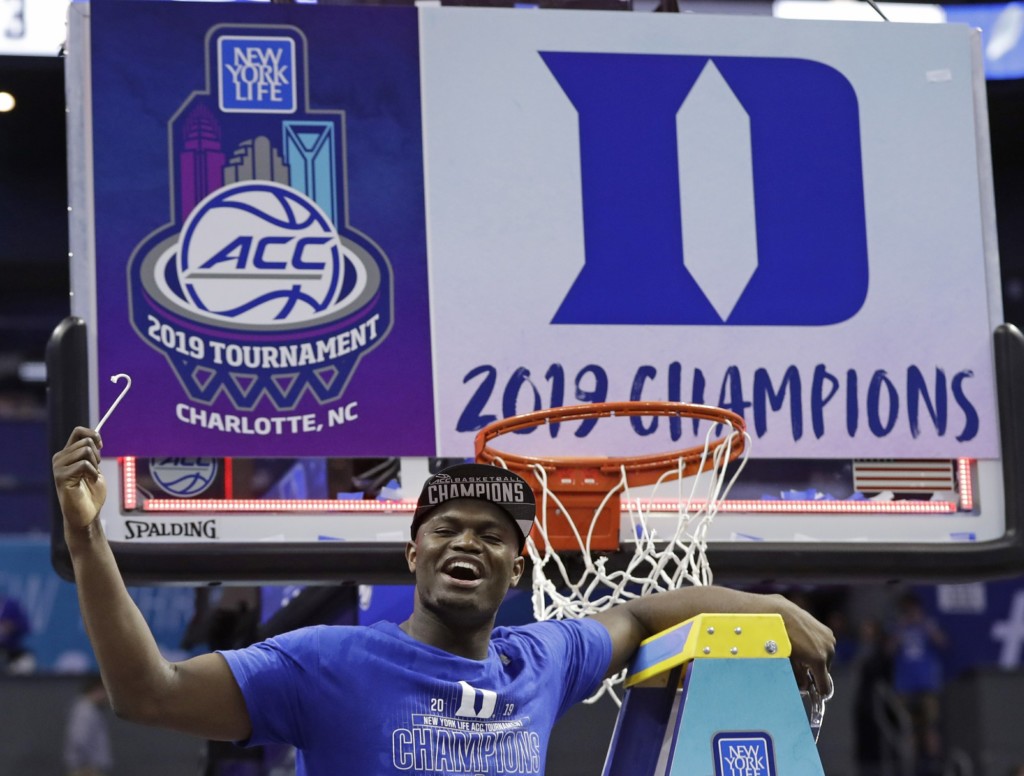 Along with the other 31 teams playing in first-round games Friday.

But let’s be real: After the way the projected top overall pick in the NBA draft played during the ACC Tournament, and the rest of the season for that matter, is there anybody that warrants more attention on college basketball’s biggest stage than the Blue Devils’ freshman phenom?

“I’m very excited to be here,” Williamson said, “because I watched March Madness as a little kid, and to actually be here … I couldn’t ask for a better situation.”

It’s not just that he’s playing for the Blue Devils, or coach Mike Krzyzewski, or on a team that many expect to cut down the nets next month in Minneapolis. Williamson even gets to start his journey in his home state of South Carolina against No. 16 seed North Dakota State.

Lest anyone think differently, the Bison know what they’re up against.

“We’re aware. We’re human,” North Dakota State guard Vinnie Shahid said. “Anybody that doesn’t think about it or tells you they don’t think about it, they’re lying to you, because we’re human and we do think about it. At the end of the day, the ball goes up and it tips, it’s something we’ve all been doing our whole lives, 40 minutes goes on the clock and it’s a basketball game.”

There were plenty of near-upsets in the first round Thursday, but games became known more for the lack of execution down the stretch — think Belmont’s failed bid against Maryland or New Mexico State’s mistakes against Auburn — than any kind of memorable March Madness.

That is, until Ja Morant dropped a triple-double and No. 12 seed Murray State routed fifth-seeded Marquette to set up a second-round matchup with Florida State.

The games get started with high-scoring but mercurial Iowa against seventh-seeded Cincinnati in Columbus, Ohio. Fifth-seeded Mississippi State will try to avoid an upset at the hands of Liberty in their East Region matchup in San Jose, California, while top-seeded Virginia will try to avoid the sheer embarrassment of losing to another No. 16 seed when it faces Gardner Webb.

The Cavaliers, of course, were blown out by Maryland-Baltimore County in the biggest upset in tournament history last season — an epic collapse that they’re ready to put in the past.

“We discussed it a lot. We used it as motivation,” the Cavaliers’ Ty Jerome said. “It can take you to a place you’ve never been if you use it the right way. So it’s more about doing what we do, playing with our same edge every single game we’ve played so far this year rather than just knowing we’ve got to make up for last year and playing with anxiousness and anger.”

As the tournament cranks back up, here are some of other story lines Friday:

ANOTHER WADE-LESS RUN: Kansas State reached the Elite Eight last season without star forward Dean Wade, who was dealing with a foot injury. Can the Wildcats do it again? Wade isn’t expected to play this weekend, and perhaps at all this month, and that means the No. 4 seed in the South Region could be ripe for an upset when it opens against UC-Irvine in San Jose, California.

BRILLIANT BULLS: Buffalo lost just three games, one of them to Marquette, and spent most of the season firmly entrenched in the Top 25. Now, coach Nate Oats’ team can prove it deserved its ranking when the No. 6 seed in the West Region opens against Arizona State in Tulsa, Oklahoma.

The No. 11 seed Sun Devils built some momentum with a play-in win over St. John’s.

SWIRLING CYCLONES: Iowa State rolled to the Big 12 Tournament title with a victory over Kansas, and Marial Shayok and Co. can score points by the dozen. The No. 6 seed in the Midwest Region gets to prove it against No. 11 seed Ohio State, a team that prefers to lean on defense.

“I think the guys have great confidence,” Cyclones coach Steve Prohm said, “and obviously playing against Ohio State, I think our vision and focus will be really good.”

PAC-12 PRIDE: The conference that was so maligned all season, and that many thought would be a one-bid league, gets a chance to prove everyone wrong. No. 12 seed Oregon and its new-look lineup of four 6-foot-9 stalwarts opens against fifth-seeded Wisconsin in the South Region, while No. 9 seed Washington gets Sam Merrill and eighth-seeded Utah State in the Midwest.

The Ducks are on a roll after winning their conference tournament title to secure a bid, while the Huskies dominated the Pac-12 all season getting routed by the Ducks last weekend.

“I mean, it’s always the next game. Win or lose, you can’t dwell on it,” said the Huskies’ Matiesse Thybulle. “For us, we moved on the second we got off the bus and we’re excited to be here and have this opportunity to play in March Madness.”