The Spring Blood Drive will take place on Friday, May 3rd from 1pm-8pm at Subaru South Boulevard (9201 South Boulevard).  Appointments and walk-ins welcome. 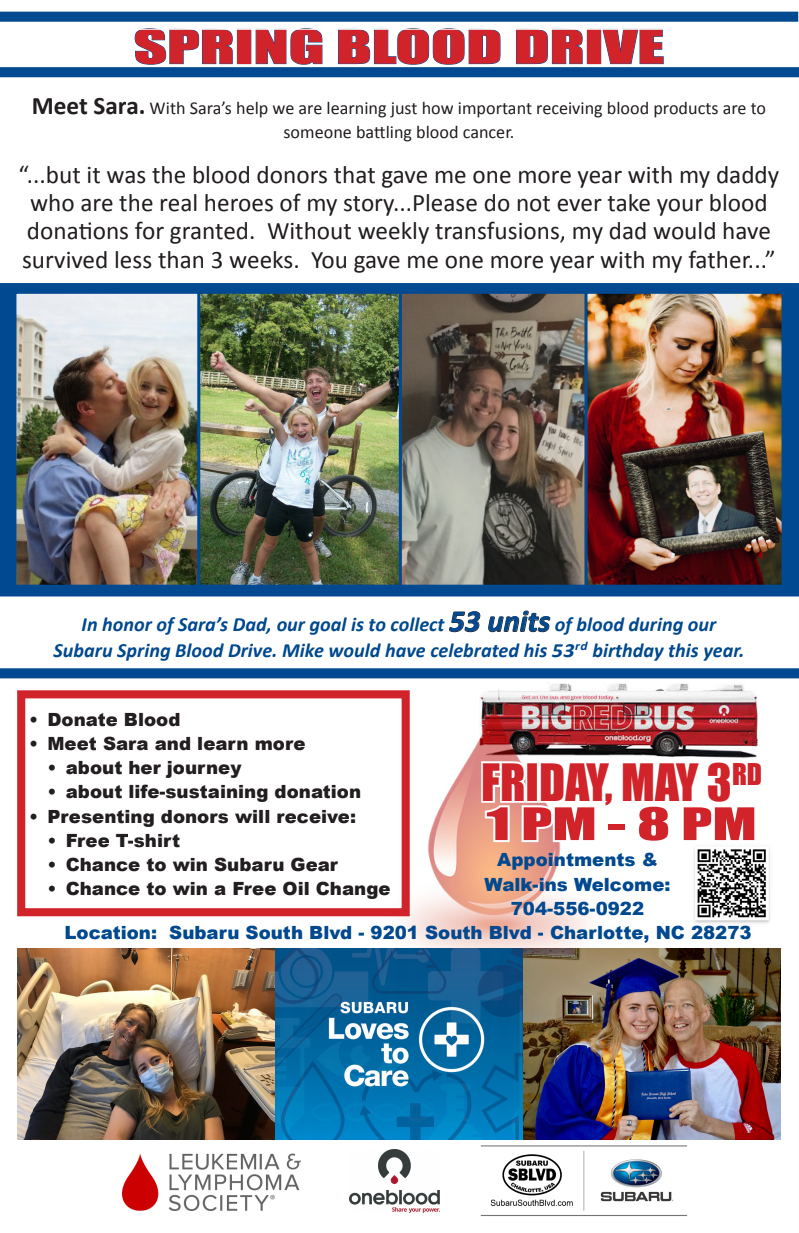 On September 4, 2017, my life was changed forever. It was on this fateful day in a cold, sterile hospital room that my dad was given a death sentence. As the chart was read, the words: “leukemia; terminal, four months” echoed through my mind. My parents spoke in hushed whispers as if my 17 year old brain would somehow not comprehend and be spared the agonizing pain and fear that cut through my heart. This could not be happening I shouted to the injustice inside my head! My dad is strong and fit and only 52. My dad was a faithful man of God, who had dedicated his legal practice to helping so many others.

He was always so strong and confident, but in that moment, I overheard the strongest man I had ever know confront the fear of his own mortality. As I hid outside the hospital room, I overheard my dad ask my mother, “You know, I have spent 20 years helping clients who have developed blood cancers from exposure to chemicals. I have probably helped thousands of people and I know if given the chance, I could help thousands more. But now, I may die from the exact same cancer. Why do you think God took me out of the game?”

I fought back tears when silence was the only answer he received. Because there was no understanding and there were no words. And in that moment of frustration and fear I decided that this would not be fate’s call, because I would make sure of it!

I began researching Acute Myeloid Leukemia. It was the most aggressive form of leukemia. There were no affective treatments offered in NC, so my parents relocated to MD Anderson Cancer Center in Houston to participate in clinical trials. With this form of blood cancer, the bone marrow stops producing red blood cells. My dad could only be kept alive through blood and platelet transfusions that he received from the donations of others. He needed to receive transfusions of two units of blood and platelets every three days. For the next year, he survived solely on the blood that he received from donors.

My dad’s only chance of survival was to endure the right balance of chemotherapy to reduce the cancerous cells to the point of remission, while preserving enough healthy cells to maintain a healthy immune system. If his body would cooperate, there was a 4% chance that a bone marrow transplant may save his life. At first, the medical team was very skeptical. This procedure was incredibly risky as my dad’s cells would have to be completely killed through extensive radiation and the donor’s cells had to be accepted by his body or the result would be fatal. Tests showed that there were no other potential matches in the world. As his only child, I would only a 50% match, but it was better than nothing. To say that I was overjoyed to be able to save my dad’s life would have been an understatement! I began the intensive preparation. This consisted of traveling back and forth from NC to TX for bone removal procedures and countless blood draws. I continued my high school courses on-line so I could be ready at a moment’s notice for the transplant.

One week before the transplant the unimaginable happened. As a result of his weakened immune state, my dad came down with pneumonia. He was no longer eligible for the transplant. We continued to hold out hope that he would regain his strength and the transplant would be rescheduled, but the cancer was too strong for his chemo beaten body.

On August 16, 2018, my daddy was barely able to speak. I held his hand and willed strength into his frail body through my fingers. I could tell he was suffering but he would not leave me. I knew I had to give him permission to rest. With all the courage that my teenage heart could muster, I whispered, “Daddy, I’m going to be ok. I promise I will go to college and make you proud. You can rest now.” He couldn’t speak, but I know he understood because a tear rolled down his face and with one last squeeze of my hand, he closed his eyes.

I have decided that I will not let my daddy’s suffering go in vain. I have decided to register to Be A Match and I will do everything in my power to be the life saving substance that I hoped to be for my dad. I will pursue a career in oncology nursing and dedicate my life to finding a cure for cancer. But what I have learned through this process, is that you do not need to be a medical professional to make a difference. Yes, I have immense gratitude for the oncology team that gave my daddy and my family the gift of hope, but it was the blood donors that gave me one more year with my daddy who are the real heroes of my story. Because of the gift of live saving blood and platelets, I got to spend another day with my daddy. Please do not ever take your blood donations for granted. Without weekly transfusions, my dad would have survived less than 3 weeks. You gave me one more year with my father. But on November 21, 2018, I learned that you helped to do so much more. On this day, I learned that as a result of my dad’s participation in the clinical trials, the FDA had approved the treatment for AML patients. It is believed to be the cutting-edge treatment for leukemia patients and may even lead to a cure. Had he not been able to receive constant transfusions, he would not have been eligible to participate in this trial that will bring healing to so many.

My daddy did not live to hear the groundbreaking FDA news, but something tells me he is looking down now smiling knowingly. If I could relive that fateful day outside his hospital room, I would have an answer to break that deafening silence. Because now I know what I did not know at the time: My daddy WILL continue to help thousands of people suffering from blood cancers. But his final contribution would be his best one yet! If I could go back in time, I would burst in that cold hospital room with this knowledge and I would yell, “Daddy, God didn’t take you out of the game, He just promoted you to MVP!”