Watkins was found in Lake Wylie on March 31st.  She had been reported missing since March 18th.  The autopsy report says she was wearing a vest, pants, two shirts, bra, underwear, socks and boots.

The report also says Watkins medical history includes depression and anxiety and that she reportedly had discussed drowning herself and was experiencing increased mental health symptoms around the time she was found dead.

No charges were filed in the case.

The husband of Vatsla Watkins has issued a statement following the Charlotte-Mecklenburg Police Department’s confirmation that her body was found Sunday afternoon in Lake Wylie near the Buster Boyd Bridge.

Curtis Watkins released the following statement to WCCB Wednesday evening after the announcement:

“We are all devastated by the loss of our dear Vasi and our grief is immeasurable. Vatsla was a very loved mother, daughter, sister, friend, and wife and her presence in our lives will be forever missed. We ask that our privacy be respected during this difficult time.”

Watkins’ body was found by a boater around 5:45pm. She was pronounced dead on scene by a responding officer.

At this time, CMPD says no foul play is suspected.

A 911 dispatcher references the search for a missing woman after a boater finds a body floating near the Buster Boyd Bridge.

The 911 caller says it appears the body was in a black life jacket and had a very small waist.  Police have not confirmed if the body was, in fact, missing 39-year-old Vatsla Watkins.  However, Watkins was last seen wearing a black jacket.

You can listen to the 911 call below.

Note: The 911 caller’s voice has been altered by police to hide his identity.

So far, the biggest lead in the case came around 8:30am on March 22nd when authorities say her silver 2004 Mercedes Benz was found parked at the Pier 49 Marina off of York Road. Watkins’ family says she was driving the car when she was last seen leaving home early Monday morning.

The Charlotte Fire Department Dive Team along with CMPD’s Aviation Unit, boats and investigators spent the day searching the area of Lake Wylie where her car was found. The search was called off around 5pm however, when crews failed to locate any sign of the missing wife and mother of two.

He tells WCCB that if his wife sees this, he just wants her to come home or let him know she is somewhere safe.

Charlotte Fire Department dive team in the water at Pier 49 Marina where the 39-year-olds car was parked. @WCCBCharlotte pic.twitter.com/d3u87sLjGG 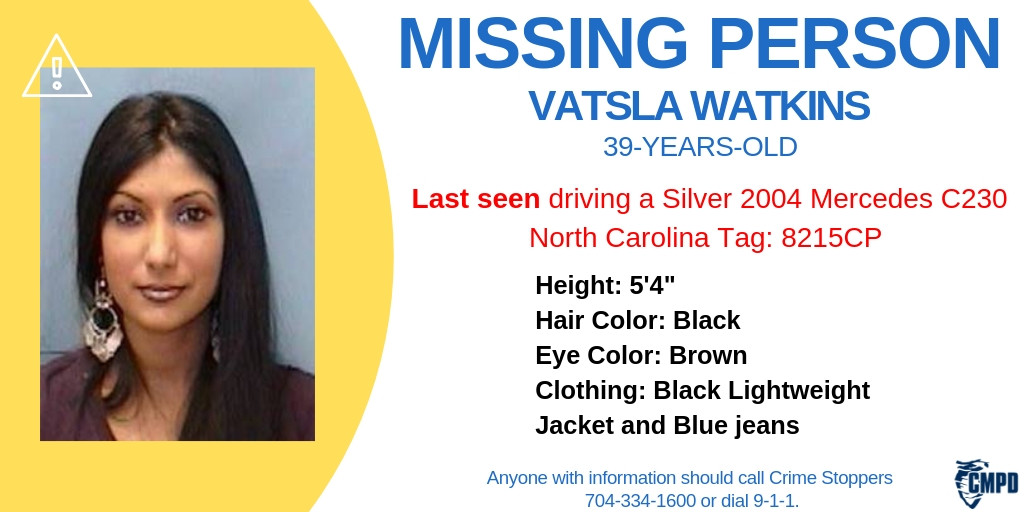