CHARLOTTE, N.C. – Ally Financial has announced a partnership with Carolina Panthers’ owner, David Tepper, and his bid to bring a Major League Soccer team to Charlotte, or in Ally’s words, “to fuel the mission of bringing top pro soccer to Charlotte and the Carolinas!”

The agreement names Ally the founding and lead partner of a potential Major League Soccer team in Charlotte and the Carolinas.” This solidifies earlier reports that Ally will be the Charlotte MLS team’s main sponsor (i.e. team jersey sponsor etc.) As yet, there is no official word from The Panthers on this partnership.

Friday afternoon’s announcement came via Ally’s Twitter and Facebook accounts, and it’s timing is no coincidence as one of Charlotte’s biggest weekends of soccer is about to get underway, as the House of Soccer opens at 5 PM Friday – a soccer fan fest in Romare Bearden Park that runs up until the 6 PM kick-off of the Arsenal vs ACF Fiorentina International Champions Cup match at Bank of America Stadium Saturday evening.

There are some interesting things to note about this partnership: Despite all the talk of David Tepper and Team President Tom Glick wanting to bring MLS to Charlotte – which seems to be gaining momentum every week, an official bid has yet to be announced, let alone when a team will begin playing in The Queen City. It may seem premature to announce a sponsor before a team is even announced (or named) but Tepper certainly seems to be putting everything in place for an offer MLS executives can’t refuse.

Another note is how Panthers’ primary sponsor and competing financial institution, Bank of America, factors into this. Bank of America purchased the naming rights to the stadium in 2004 in a 20-year deal that will expire after the 2023 season. Could a major sponsor change be on the horizon?

The Carolinas are circled by MLS franchises; Orlando, Atlanta, Cincinnati, Columbus and Washington (plus Nashville from 2020). Bringing “top pro soccer” to Charlotte would fill the hole on the MLS map and Ally clearly think it’s bid worth backing. When could this happen? Even if a team was announced today, it would still be a few years before a ball is kicked. That said, could the number “22” that appears on the shirts the people are wearing in Ally’s video be a clue? Time will tell…

At this time, no official connection has been made between the Charlotte Independence and Tepper’s potential MLS team but it shouldn’t be ruled out. Additionally, Steve Malik, owner of NCFC and NC Courage is pursuing a separate, rival bid to bring MLS to Raleigh but it doesn’t seem to be impeding any efforts in Charlotte.

Ally is thrilled to be the first partner alongside David Tepper to fuel the mission of bringing top pro soccer to Charlotte and the Carolinas! Let’s rally together and throw our scarves up in support of CLT soccer! #CLTwantsSoccer pic.twitter.com/Yl24pzRsk8

CHARLOTTE, N.C., July 19, 2019 – The professional soccer fan base in and around the Queen City rallied on Friday, when Ally Financial Inc. (NYSE: ALLY) announced a multi-year agreement with the Charlotte Soccer Bid Team (led by David Tepper). The agreement names Ally the founding and lead partner of a potential Major League Soccer (MLS) team in Charlotte and the Carolinas.

During the past few months, the Bid Team has stepped up efforts to bring an MLS club to the region and today Ally confirmed the team’s first signing. The announcement came via social media using the hashtag #CLTwantsSoccer and was accompanied by a short video.

“This new partnership signals an exciting time for both Ally and the Charlotte region,” said Jeffrey Brown, chief executive officer, Ally. “We’re humbled to be the first partner alongside David Tepper in his quest, and in addition to expanding our presence in the market, we’re excited about the positive economic impact an MLS team will have in the region.”

Among the benefits of being the lead partner, Ally will receive front-of-jersey (or “kit”) branding. For more details on the partnership – including kit designs and other updates – be sure to follow @Ally on Twitter.

“We couldn’t be more excited about our partnership with Ally. Soccer in the Carolinas is buzzing with excitement and we know that bringing another pro sports team to Charlotte will benefit fans, the city, region and wider community,” said David Tepper.

Aside from marketing efforts, Ally plans to leverage its partnership with the Bid Team to further demonstrate its commitment to the local community. Professional soccer is a great platform to help amplify Ally’s efforts surrounding economic mobility, financial literacy, employee engagement, and more.

The newly announced partnership is an expansion of Ally’s relationship with soccer. Since 2016, Ally has served as the official financial services partner of the International Champions Cup.

Ally first became involved with soccer because of the fans, as they are known for their passion. Soccer fans have an immense allegiance to their teams. Likewise, Ally has a similar passion for its customers, which translates into an immensely passionate customer base who love to review and recommend its financial services. 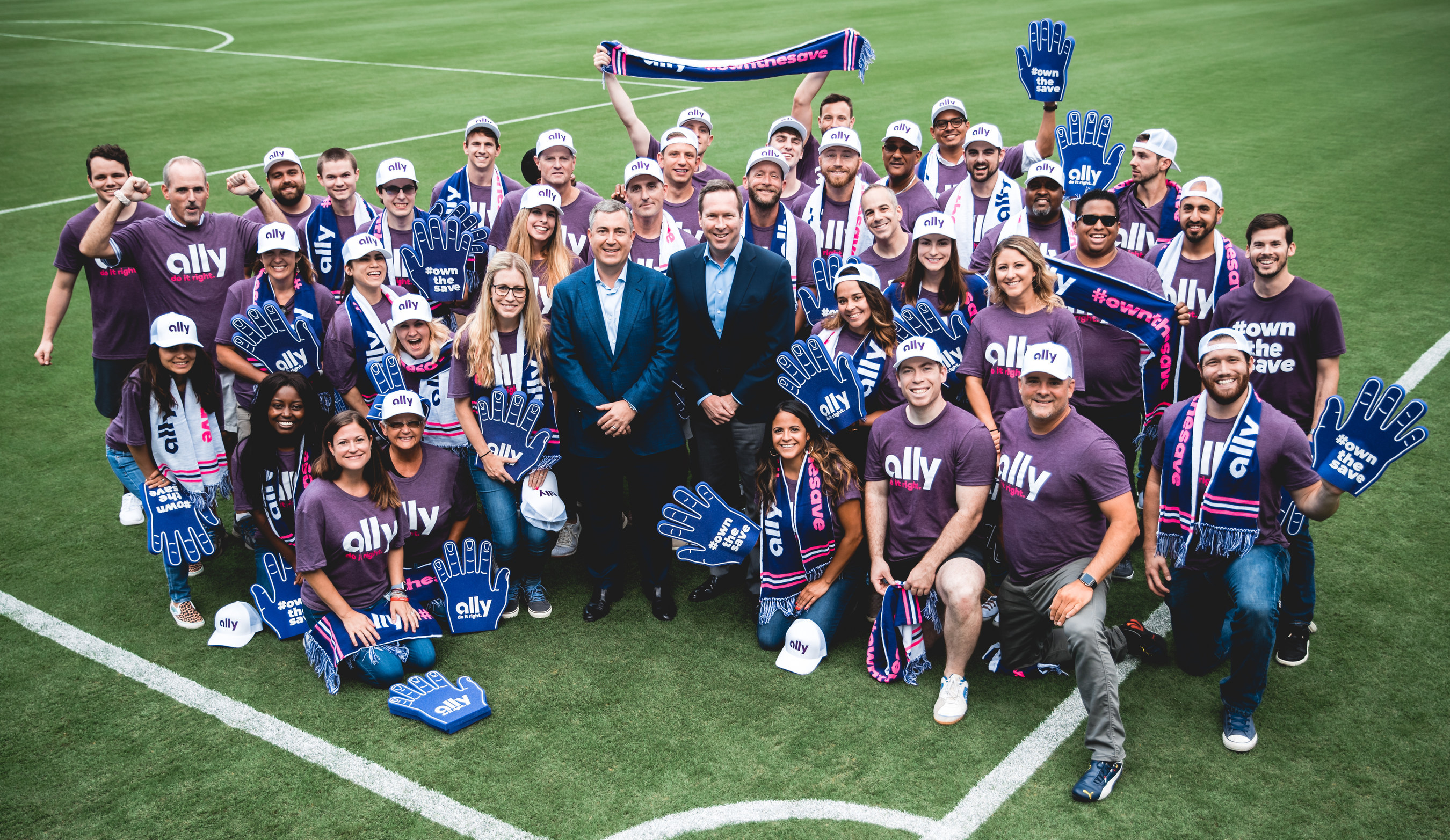 An excited group of employees gather around Ally Financial CEO, Jeffrey Brown (left) and Tom Glick (right), leader of the Charlotte Bid Team Friday after they announced a multi-year agreement. The agreement names Ally the founding and lead partner of a potential Major League Soccer team in Charlotte and the Carolinas.

Ally Financial is a bank holding company headquartered in Detroit, Michigan. Ally’s Charlotte office is located at 440 South Church, AKA the “Ally Center.” They are scheduled to move to the new Ally Charlotte Center on S. Tryon St. when it is completed in 2021.

Article updated to mention professional soccer teams throughout the Carolinas.