MATTHEWS, NC — The Matthews Police Department has purchased 11 new Cardiac Science G5 Defibrillators thanks to a $15,000 donation from Novant Health. 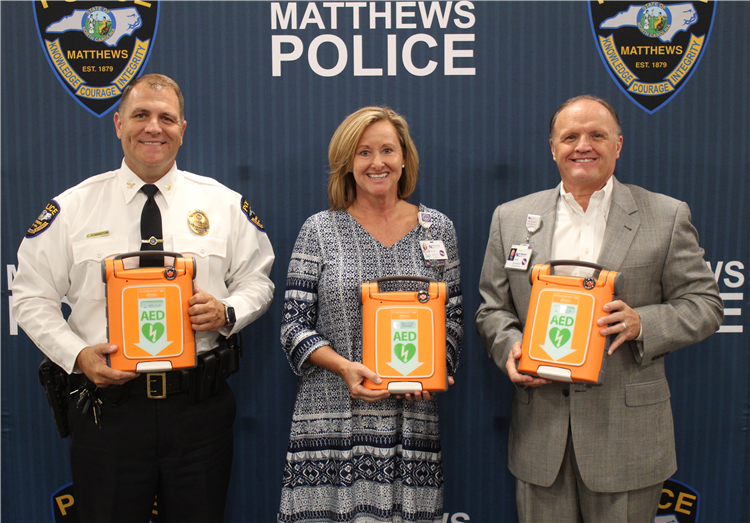 The department says the purchases are part of their Automated External Defibrillator (AED) Program. Officials say the new units are lighter, more durable, and less expensive than the ones they will replace.

Extended warranties will also allow the department to use them for a longer period of time.

“The AED is a vital part of the best-practices recommendations for the immediate care of a person who experiences sudden cardiac arrest,” said Roland Bibeau, president, and chief operating officer of Novant Health Matthews Medical Center. “These AEDs enable the Matthews Police Department to better care for our community in the event of an emergency, when time is of the utmost importance.”

Officials say the AED Progam started 13 years ago with the goal of one day having enough AED units to assign one to each officer. Once that goal was achieved, the goal switched to maintaining that level of preparedness in case an officer encountered someone suffering from a cardiac episode.

According to an estimate by the American Heart Association, using an AED immediately after sudden cardiac arrest increases the chance of survival by more than 90%. This statistic, says Matthews Police, is why it is vital that every officer have this equipment readily available.

“When Novant Health found out that we were looking at ways to start upgrading our AED’s, they immediately asked how they could help,” said Matthews Police Chief, Clark A. Pennington. “It’s such an overwhelming feeling when you have community partners that are willing to help provide lifesaving equipment to our officers. We all benefit when our officers have the best tools possible.”