Panthers Hopeful Cam Newton Will Be Ready For Opener 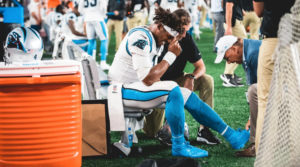 Newton was trying to avoid a sack in the first quarter when he got tripped up and landed on the turf. He hobbled to the sideline and grimaced in pain on the bench before walking under his own power to the locker room.

The 2015 league MVP was in 11 plays and three series when the Panthers gained just 29 yards. He was sacked twice.

Newton left the stadium in a walking boot and didn’t address the media before boarding the team bus.