CONCORD, NC – In a moving salute to America’s heroes on Sept. 11, Charlotte Motor Speedway and The American Red Cross began the speedway’s Laps for Life blood drive on Wednesday by honoring those who lost their lives in the attacks 18 years ago. 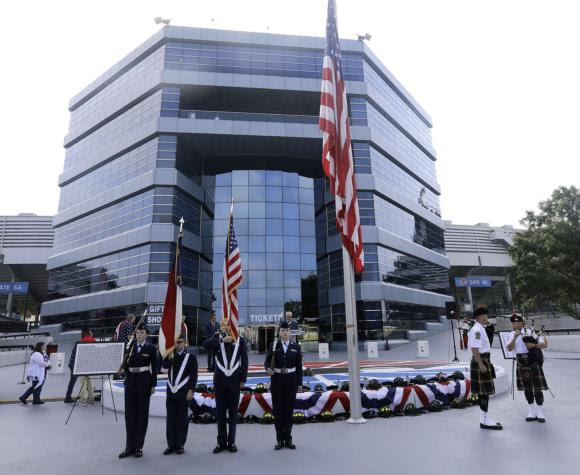 Military chaplains Henry Haynes and Randy Cash spoke at the event’s opening ceremonies at the Avenue of Flags, which featured a collection of emergency vehicles and public safety officers amid a backdrop of American flags. Haynes, a retired U.S. Army chaplain, was Chaplain of The Pentagon when the Sept. 11 attacks occurred.

“It was a real honor and privilege to come speak, because this honors one of the most memorable days of our nation’s history,” Haynes said. “(The Sept. 11 attacks) affected 90 percent of the nations across the world – not just the United States. Having served at The Pentagon during that time, it was amazing seeing the generosity of people from schools to foreign governments, anything you could think of. Their generosity was overwhelming. … It was an unthinkable event – something you could never have envisioned.”

Cash, a native of Lincolnton, North Carolina, was commissioned a U.S. Navy Chaplain in 1980. After years of service with the Navy and U.S. Marine Corps, Cash was designated Deputy Chaplain of the Marine Corps on Sept. 11, 2001.

“So many people’s lives were lost or changed on that day,” Cash said. “As everything was unfolding, I can remember huddling with everyone around me and just praying.”

Following the opening ceremonies, donors gave blood in the speedway’s infield Paddock Club and took a ride on the Charlotte Motor Speedway ROVAL™.

“This is an opportunity for us as a speedway to give back,” said Greg Walter, Charlotte Motor Speedway’s executive vice president and general manager. “Sept. 11, 2001, changed the world forever. Having this blood drive with The American Red Cross is a natural for us, because this means so much to our staff and to our community to take a moment and remember the impact of what happened while we give back.”