CONCORD, N.C. — A Charlotte man has been charged following a shooting at a Concord convenience store.

Demoryia Bryant, 24, of Charlotte, is charged with Discharging a Firearm into an Occupied Vehicle and Possession With Intent to Sell or Deliver Marijuana. 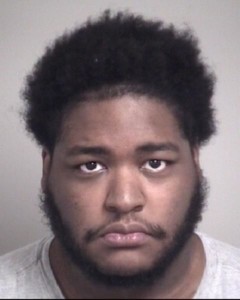 According to the Concord Police Department, on Wednesday, November 19th, 2019,at about 3:12 p.m., officers responded to reports of gunfire outside of the 7-Eleven on Poplar Tent Road near I-85.

Arriving officers found a black Nissan with damage from gunshots.  Witnesses told police that a white Honda drove into the 7-Eleven parking lot and rammed into the black Nissan before Bryant got out of the white Honda with three other men and began to shoot at the driver of the black Honda.

Bryant and the three other men then fled the scene in the white Honda.   The Concord Police Department, the Cabarrus County Sheriff’s Department, and the North Carolina Highway Patrol were able to locate all four individuals involved in the shooting near Goodman Road in Cabarrus County.

Bryant was charged and the other three men were released.  The case is still under investigation but police say they think the victim and suspects knew each other.

Anyone with information is asked to contact the Concord Police Department at 704-920-5000 or Cabarrus County Crime Stoppers at 704-93-CRIME.