HICKORY, N.C. — A carpenter is being credited with saving a child from a possible drowning at Lake Hickory that took place on December 27, 2019.

Alexander County 911 Center received and responded to a call about a possible drowning of child at the lake around 11:15 a.m. that day.

When the emergency personnel arrived at the scene they found that a six-year-old child had fallen into the lake. 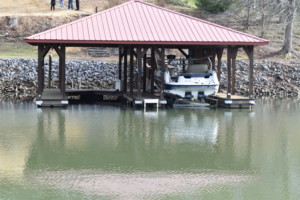 Lake Hickory location where child fell into the lake.

During the time of the incident there were three men across the cove who were working on remodeling a lake home when they heard what they thought was a cat screaming.

They then realized that it was a child screaming for help and that the sound was coming from the water.

Scott Lingerfelt, one of the carpenters, jumped into the water fully dressed and swam around 40 yards to reach the child.

As Lingerfelt swam to the dock, James Wycoff, the homeowner of the lake house across the cove, called 911, a news release stated.

Once back to the dock, the child was united with his brother who helped him get out of the water.

The child was transported to Catawba Valley Medical Center, where he was evaluated.

Sheriff Bowman would like to thank the citizens who were involved for their help in saving a life and plans to recognize them at the Alexander County Sheriff’s Office on January 7.