CHARLOTTE, N.C. — A Charlotte family is thankful they did not get hurt when a tree crashed through their home.  The tree fell through the roof of the children’s bedroom while they were sleeping.  It happened on Old Steele Creek Road.

“It sounded like a tank sound, it hit very hard and it sounded so loud,” says 8 year-old Abdi Rahman.

“When I heard the boom sound, I thought everything was fine, and I turned then I saw all that damage and the big log was inside the room,” says 10 year-old Abdi Rahim. 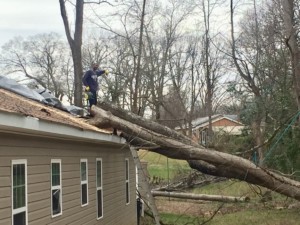 The brothers jumped from their bunk beds around 2:30 Tuesday morning when a massive tree crashed through their roof.  The boys’ father quickly ran into their room and noticed his youngest son nearly buried in debris.

“I got him, pulled him out, then I saw his head, cause he had insulation on top of him, and a piece of plywood with nails on it,” says Abdikadir Arab, homeowner.

Thankfully, all the brothers walked away unharmed.  When the sun came up, the hard part began, removing the tree from the house.  Luckily, the family got a little help from neighbors who showed up to lend a hand.  The family says they have no idea what caused the tree to fall.  They’re just anxious to get their home repaired.