On February 13, around 12:15 p.m., deputies were dispatched to a residence on Old Branch Road in the Fort Lawn area of South Carolina after a homeowner found evidence of a burglary.

After the call to law enforcement, the suspect left the home with the gun pointed at the homeowner and guests including minor children, a report stated. He also forced the victims to give up their cell phones.

According to detectives, an adult instructed the children to run away but then suspect pursued them and caught one child with a gun still in hand.

During this time one of the victims went to another location to call for help. Upon arrival Corporal R. Branham took Antonio Montreal Culp, 38, of Great Falls, S.C. into custody. 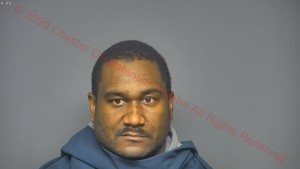 After an investigation it was revealed that Culp illegally entered into the residence and waited on the homeowner to return.

According to the Chester County Sheriff’s Office, Culp was charged with Domestic Violence 1st Degree, Burglary 2nd Degree – Violent, Damage to Property and Pointing and Presenting a Firearm.