BURKE COUNTY, N.C. — Burke County Sheriff’s Office has made an arrest on a suspect who was stealing metal car parts to exchange for cash.

Detectives made the arrest on March 2 after finding the suspect crawling underneath a disabled vehicle on I-40 eastbound past Exit 113.

The suspect who has been identified as 36-year-old Matthew Teague was underneath the disabled vehicle and a catalytic converter was already removed. 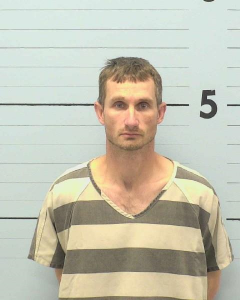 According to a news release, a detective pulled over beyond the truck as another detective traveling on I-40 pulled behind the truck.

After an investigation, Teague was detained and later confessed to removing one of the catalytic converters from the vehicle and selling it to a local metal recycler earlier that day.

During the interview, Teague also stated that he had returned to remove additional vehicle parts when officers located him.

Teague was arrested on scene and transported to the Burke County Magistrate’s Office where he received a $15,000.00 secured bond for his charges and is now being held at the Burke County Jail, deputies say.