CHARLOTTE, N.C. — Detectives with the Charlotte-Mecklenburg Police Department are requesting the public’s assistance in a robbery from a north Charlotte business.

According to officers, the incident happened on Sunday around 4:30 a.m., when a man entered a 7-Eleven, located on Old Concord Road near W. Rocky River Road, and approached the cash register. 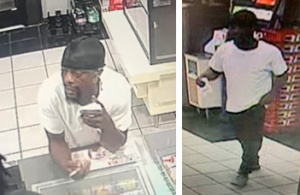 During a financial transaction, the suspect took money from both cash registers by force and exited the business, a news release said. He then fled the scene on foot in an unknown direction.

According to CMPD, the suspect has been described as a black man who is approximately 5’6” tall, has a thin build and a beard. He was also last seen wearing black pants and a white t-shirt.

CMPD’s Armed Robbery Unit ask asking anyone in the community who knows the suspect pictured below to call 9-1-1. The public can also leave information anonymously by contacting Crime Stoppers at 704-334-1600 or http://charlottecrimestoppers.com/.