LINCOLNTON, N.C. — Lincoln County deputies have charged a suspect wanted in connection to several fraud charges after a foot chase.

When a Lincoln County detective was traveling on Highway 73 on March 27, they recognized a man wanted in connection to these crimes walking near the Japan Restaurant and Midtown Sundries.

According to a news release, when the officer exited his vehicle the suspect fled the scene on foot into a nearby wooded area.

With back up the suspect, 25-year-old David Buchanan, was located behind a residence on South NC Highway 16 and a little while later was was found in the basement of that home, officials say. 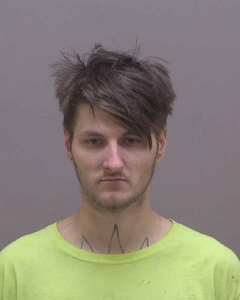 According to officials, Buchanan is being charged with four felony counts of obtaining property by false pretenses, felony identity theft, resist, delay and obstruct a public officer and misdemeanor breaking and entering. Deputies also served two outstanding orders for arrest and a probation violation warrant.

He has also been placed under a $44,000 secured bond, a news release stated. In addition, he is being held on a no bond hold from Mecklenburg County where he faces additional charges.