GASTONIA, N.C. –The Gaston County Police have arrested four suspects, including three juveniles, after a robbery and car chase.

On Thursday, police were stationed at on of the Gaston County school meal pick-up locations when an officer was informed that someone at the location had been assaulted and possibly robbed, a news release said.

The officer was able to quickly identified the suspect vehicle and attempted to stop it. The car fled and a short vehicle pursuit ensued.

The car eventually pulled over and was found to be reported stolen from Charlotte, officers say.

All four occupants were arrested without incident and three of them, to include the driver, were teenage juveniles.

The only adult in the car was 19-year-old Absolute Pendleton who has been charged with seven crimes, four of which were felonies., according to officials. Three of the felony charges were Solicit and/or Coerce juveniles to Participate in Gang Activity. 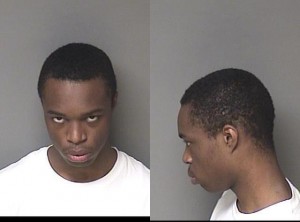 Pendleton is being held at the Gaston County Jail on a $50,000 secured bond, a news release stated.