Officers Looking For Suspect That Stole A Parked Running Vehicle

DENVER, N.C. — Lincoln County deputies are looking for a suspect that stole a parked vehicle that was left running outside a QuikTrip in Denver while the owner was inside the store

According to a news release, deputies were dispatched to the store on NC Highway 73 on March 31 around 2 p.m. after the owner, Mark Hayes, reported the vehicle stolen.

Hayes informed officers he left the truck running while he went inside to make a purchase, deputies say. He said he was away from the vehicle for about 5 to 10 minutes.

The vehicle is described as a gray 2012 Ford F350 with a flat bed. The truck has a South Dakota registration plate of 1AW323.

There was also a Lincoln welder and accessories, a tool box containing assorted tools, a cooler and items of clothing, on the bed of the
truck. The value of the truck and stolen items was estimated at more than $47,000, according to a news release. 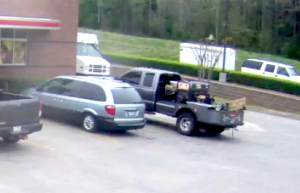 The convenience store’s survellience video shows a van pull up next to the truck and the passenger gets out of the vehicle and looks into the truck. The driver of the van then went inside the store. When he returns the passenger got into the Ford F350 and drove away in an unknown direction.