CHARLOTTE, N.C. — Charlotte has now been identified as the nation’s 15th most populous city, surpassing San Francisco, according to U.S. Census Bureau.

The new census data reported Thursday that the city’s population jumped two spots in the past decade.

The composition of the list of the 15 most populous cities has remained largely unchanged with only two new cities joining the ranks as of July 1, 2019. Fort Worth is now in 13th place and Charlotte, N.C. in 15th place with Indianapolis, Ind., and San Francisco, Calif., both falling off the top 15. In addition, the list’s order has changed slightly. 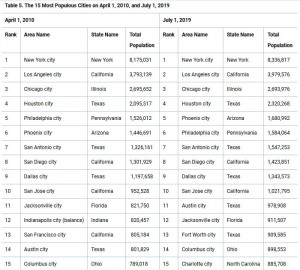 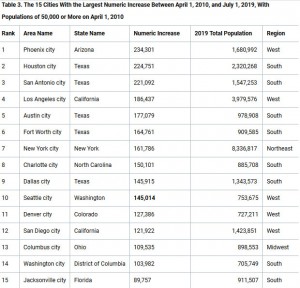 According to new census data, 10 of the 15 the fastest growing cities and towns were located in the south. Even the small towns grew by 6.7 percent since 2010.

People have arrived in Charlotte from the northeastern United States and the west.

That boom has helped drive the city’s building frenzy. But it’s also been a factor in pushing up the cost of living. The city now suffers from a shortage of affordable homes.

In North Carolina between 2018 and 2019 around 64,000 housing units have been developed to sustain the growing population across the state bringing the total to around 420,000. According to data, the state is among the top five states that gained more than 50,000 housing units and the top six with the largest numeric increase in housing units overall.