SALISBURY, N.C. — A Salisbury teen that was reported missing early May of 2020 has been located in Atlanta, Georgia with a registered sex offender.

According to Rowan County deputies, 16-year-old Jasmine Brooks was reported missing on May 2 by her foster parent and was entered into National Crime Information Center (NCIC.) The juvenile did not make contact with family members through Facebook on May 21, but no one has heard from her since then. 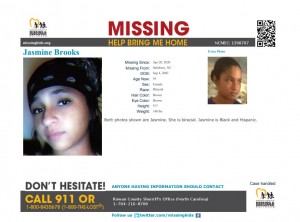 Brooks was located after a tip was received from a caller who had talked with her in Atlanta, and then had checked the internet and determined that she was a missing person.

The Atlanta PD, Federal Probation, and US Marshals were able to locate Jasmine during the search, and were also able to locate a quantity of cocaine, along with other items that he was prohibited from having due to conditions of his probation.

Rowan County DSS will travel to Atlanta to pick up Jasmine, and law enforcement agencies in Georgia, including Federal agencies, will be making the charges on Justin Levi Marino for the crimes he committed there and for picking up Jasmine Brooks and crossing state lines with her when he returned to Atlanta.