Louisville Officer Involved In Breonna Taylor Shooting To Be Fired 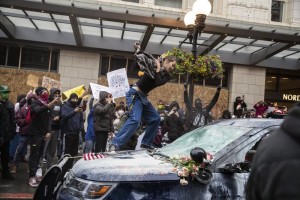 A protester breaks the windshield of a police vehicle in downtown Seattle during “The Defiant Walk of Resistance Against Injustice,” organized by Not This Time!, a nonprofit committed to reducing fatal police shootings and creating safer communities, Saturday, May 30, 2020. The event honors Ahmaud Arbery, Breonna Taylor and George Floyd. (Amanda Snyder/The Seattle Times via AP)

LOUISVILLE, Ky. (AP) — Louisville’s mayor said Friday that one of three police officers involved in the fatal shooting of Breonna Taylor will be fired.

Fischer said officials could not answer questions about the firing because of state law. He referred all questions to the Jefferson County attorney’s office.

Taylor, who was black, was gunned down by officers who burst into her Louisville home using a no-knock warrant. She was shot eight times by officers conducting a narcotics investigation on March 13. No drugs were found at her home.