CHARLOTTE, N.C. — Police have released the name of the man who was killed when his vehicle overturned and caught fire on Independence Boulevard Wednesday afternoon.

Officers with the Charlotte-Mecklenburg Police Department say 43-year-old Lerico Washington was driving west on Independence Boulevard near Albemarle Road in a 2008 Mazda Tribute when he veered across three lanes of travel to the right without braking.  The vehicle drove off the road, struck a fence, overturned, and then caught on fire, according to a news release. 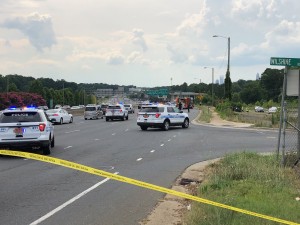 Police say Washington died as a result of the injuries he sustained in the accident.  Police say speed does not appear to be a factor and it is unknown at this time if impairment was a factor.  Police say the investigation is ongoing and anyone who witnessed the crash is asked to call Detective Buckley at 704-432-2169.

Two inbound lanes on Independence Boulevard were closed following the crash but all lanes are back open at this time.