N.C. State Troopers have identified the driver who was found dead under a bridge on Interstate 77 in a flipped pickup truck as a missing NC woman.

The driver in the crash has been identified as 41-year-old Jessica Kelly Lee of Sparta, troopers say. Lee had been considered a missing person by the Alleghany County Sheriff’s Office as her whereabouts had not been known since July 13. 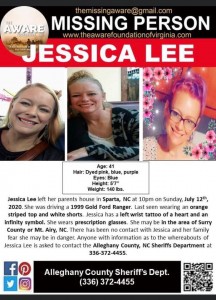 Investigators are still attempting to determine the exact date of the collision.

IREDELL COUNTY, N.C. — The driver of a pickup truck who was found dead Thursday evening under a bridge on Interstate 77 in Iredell County, near Statesville, may have crashed several days to weeks ago, according to the NC State Highway Patrol.

Troopers responded to I-77 northbound, near the 56 mile marker at the South Yadkin River, around 6:40 p.m. after a passerby spotted an overturned vehicle in the median area at the bottom of a deep embankment.

After an initial investigation officials were able to determine that the truck was traveling north on I-77, ran off the left side of the roadway into the median, went over the embankment, and jumped the South Yadkin River before coming to rest upside-down in heavy brush.

One person was found dead inside the vehicle. Investigators are working to determine the identity of the victim who may have been considered a missing person, troopers say.

The investigation into the case is active and ongoing.

Hungry? Check Out Optimist Hall For An Array Of Food Options