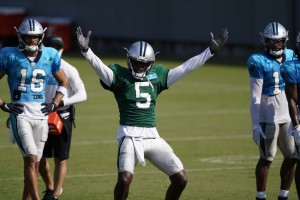 CHARLOTTE, N.C. (PANTHERS)— The Panthers on Saturday reduced their roster to 53 players in advance of the 4 p.m. deadline, waiving 23 players and releasing two.

Notably, the Panthers waived running back Reggie Bonnafon. He played a heavy special teams role and rushed for 116 yards with a touchdown in 16 games last year.

It’s important to remember the current roster isn’t “final.” The Panthers could make some moves over the next few days. For example, tight end looks like a position of need as there are only two on the roster (Ian Thomas, Chris Manhertz), and Thomas is currently dealing with a toe injury.

The Panthers have two players on the reserve/COVID-19 list who do not count against the 53-man roster: cornerback Derrek Thomas and guard Chris Reed.

Below is a list of all the Panthers’ Saturday transactions:

With a 16-man practice squad in 2020, many of Saturday’s cuts may end up staying in Carolina. Teams can begin signing players to their practice squad at 1 p.m. on Sunday.