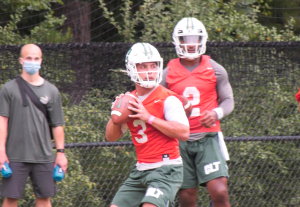 It’s “next man up” for the 49ers Football team.

In addition to losing its season opener to Appalachian State, Charlotte has lost its starting quarterback.

The Forty-Niners will be without Chris Reynolds this weekend when they take on the 12th ranked Tar Heels in Chapel Hill.

According to head coach Will Healy, the junior QB suffered an upper body injury on the very first play of the game against the Mountaineers this past Saturday in Boone. Reynolds was able to tough it out and play the entire game, but now, he’s out indefinitely.

Healy says Reynolds is one of the toughest football players he’s ever coached, but Charlotte’s head coach is excited for Dom Shoffner to have an opportunity.

The transfer out of Monroe College and NC Central will make his first start for the 49ers this Saturday afternoon.

In addition to Reynolds, starting defensive end Markees Watts is also expected to be out with an injury.

Kickoff in Chapel Hill is set for 3:3o.