Cabarrus County deputies have charged two 25-year-olds from Gastonia in connection with the Concord homicide investigation that led police on a car chase in Rock Hill. There are now four suspect that have been charged for their involvement in the Wednesday morning incident.

Cabarrus County deputies responded to a Flowe Store Road East home around 9:10 a.m. where they found a man, identified as Jason Lee Newell, dead due to a gunshot wound.

Through an initial investigations deputies determined that the victim’s vehicle was missing from the residence and possibly located in Rock Hill, South Carolina.

The Rock Hill Police Department was able to locate Newell’s vehicle after a pursuit and traffic stop. As a result of the traffic stop, Rock Hill police arrested 20-year-old Hassan Aliek Burkett and 20-year-old Elijah Isaiah McKnight on charges of Possession of a Stolen Pistol and Carrying a Pistol Unlawfully. 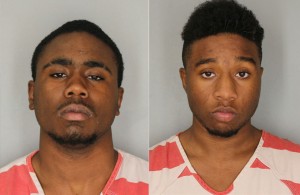 As a result of the ongoing investigation, Cabarrus County Sheriff’s Office obtained arrest warrants for Burkett and McKnight for Robbery with a Dangerous Weapon. They are currently being held in the Rock Hill Police Jail.

If anyone has any information regarding this case please contact the Cabarrus County Sheriff’s Office at (704) 920-3000 or you can remain anonymous by contacting Cabarrus Area Crime Stoppers at (704) 93-CRIME.