The Charlotte Knights have announced that their season has been delayed by close to a month. The season opener was set to take place on April 6 and is now expected to be played on May 4.

“We were informed last night by Major League Baseball that the Triple-A East season will be delayed until May 4,” The Charlotte Knights said in a statement. “We will have more details soon on how that will impact our 2021 schedule and what that will mean for our fans and partners. We appreciate the community’s support and look forward to welcoming Knights fans back to the ballpark in the near future.”

CHARLOTTE, N.C. (News Release) — Over the past several days, the Charlotte Knights have announced a number of important details regarding the upcoming 2021 season. Last week, the Knights announced the continuation of their affiliation with the Chicago White Sox, as well as the newly-structured Triple-A East League under Major League Baseball’s Player Development License (PDL).

Today, the Knights are pleased to announce their schedule for the 2021 season — the team’s first at Truist Field since 2019 due to the COVID-19 pandemic.

70 HOME GAMES AT TRUIST FIELD – INCLUDING JULY 4TH WEEKEND
The 2021 Charlotte Knights’ season will feature 142 games, a combination of 70 home and 72 road matchups from Tuesday, April 6 to Sunday, September 19.

The season opener will be on Tuesday, April 6 at Jacksonville against the Marlins’ new Triple-A affiliate.

After six games in Florida, the Knights will host their home opener at Truist Field on Tuesday, April 13 vs. in-state rival Durham (Triple-A affiliate of the Rays).

Other highlights of the home schedule include: 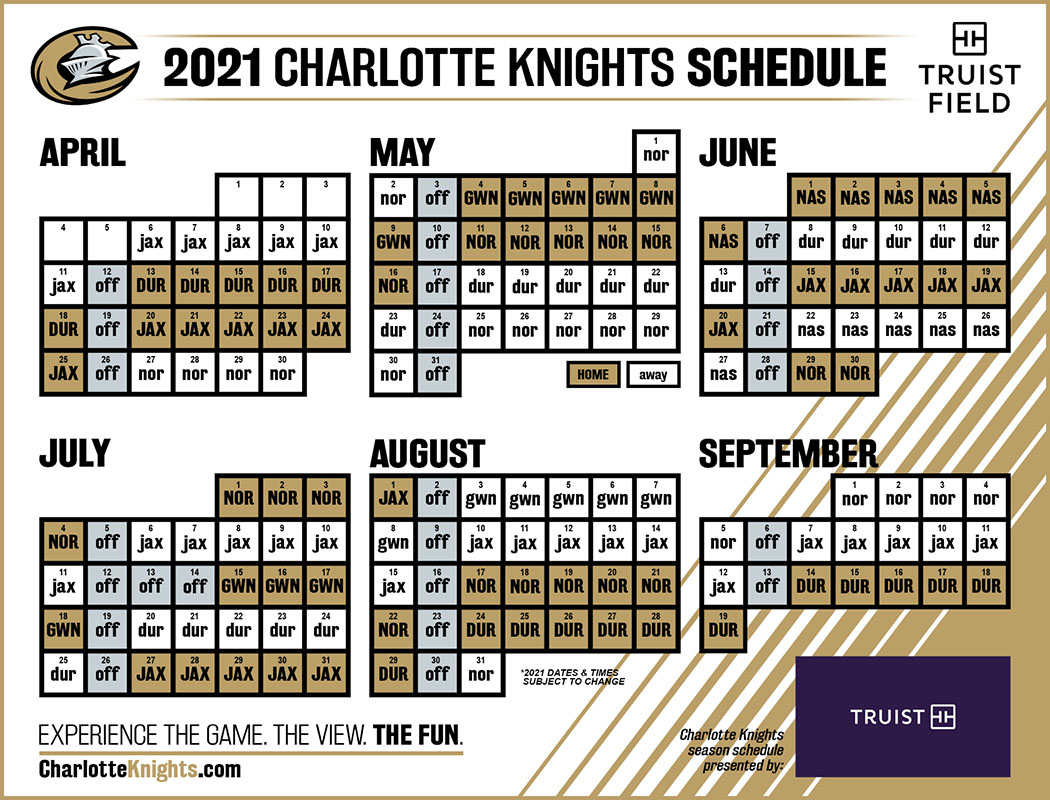 SCHEDULE STRUCTURE DIFFERENT FOR 2021
The schedule will consist of games being played on Tuesdays through Sundays throughout the year with all teams observing a league-wide Monday off day.

All series will be six games in length with the exception of one (four-game set vs. Gwinnett July 15-18).

The months of April and May will feature 12 scheduled home dates each.

WILL FANS BE ABLE TO ATTEND THE GAMES?
Yes, under current North Carolina governmental health orders, the Knights are able to host up to seven percent of their overall capacity. The team is engaged in discussions with state and local officials about the ability to expand that percentage safely before the season begins.

WHEN WILL TICKETS BE AVAILABLE?
The Knights’ staff will be reaching out to season members this week to discuss their options for the 2021 season. At the conclusion of that process, the Knights will determine when tickets will be available for partial season ticket package holders, hospitality areas, groups, and individual game purchases.

A printable schedule featuring all 142 games and opponents for the 2021 season can be found at www.CharlotteKnights.com. More details, including game times, promotions and theme nights, will be announced at a later date.