STATESVILLE, N.C. —  A Statesville woman who pushed for the removal of a Confederate Monument says she’s become the target of the Ku Klux Klan once again.

Genesis Houpe contacted WCCB after she found a Confederate flag hanging outside her apartment door early Sunday morning.  She immediately called Statesville Police.  She says officers patrolled the area, and took the flag in for evidence.  Just a month ago, Houpe contacted police after finding a KKK flyer on her front door. 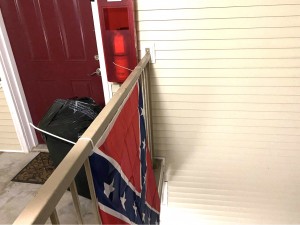 Houpe says she’s concerned for her family’s safety, and she wants police to arrest the people who are attempting to intimidate her.

“I do feel targeted.  When you live in an area as densely populated as mine, it’s hard to pick out one apartment if you don’t know who you’re looking for,” says Genesis Houpe, “I’m literally in the process of starting a Gofundme to see if I can get people to at least help me because I have to relocate,” she says.

Last year, Houpe started a petition for the removal of a 100 year old Confederate Monument outside the Iredell County Courthouse.  But, last month, the Iredell County Board of Commissioners voted to take no action to relocate the statue.

WCCB News contacted a man claiming to be the grand dragon of the KKK who emailed us last month about our story.  He told us they were not responsible for hanging the flag.