GASTONIA, N.C. — Nearly three years after a woman was shot accidentally by a Gastonia Police Officer, she says a bullet fell out of her body while she was cleaning her house.

31-year-old Brittany Lynn was shot by Gastonia Police Officer Stephen Whisnant back in 2018, while the officer was investigating a noise complaint.  Police say the officer was trying to serve a warrant on Lynn’s brother.  But, according to authorities, Whisnant accidentally fired his weapon, striking Lynn in her breast.

The Gaston County District Attorney later announced no charges would be filed against the officer.

On Monday, nearly three years after the shooting, Lynn says the bullet fell out of her body, despite the fact that she says doctors at the hospital told her back in 2018 she was only grazed by the bullet. 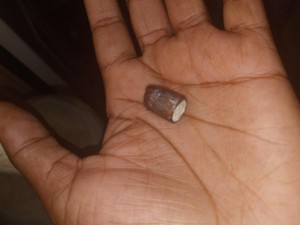 “I was cleaning up yesterday and I bent down to pick up some trash and a bullet just came out of nowhere out of me,” says Lynn.  “And, I’m looking like, is that really what I’m seeing?  So, I went to pick it up, and was like, it’s really a bullet, a real live bullet,” she says.

Lynn says she carried the bullet in a zip lock bag to Caromont Health in Gastonia, the same hospital who treated her the night she was shot.  WCCB News asked the hospital for a response to her claims.  They released this statement:

“In accordance with HIPAA, CaroMont Health is unable to discuss or disclose information about a patient’s care or personal health information without their written consent. The providers and staff at CaroMont Regional Medical Center seek to identify and address patient concerns as quickly as possible. We appreciate WCCB alerting us to the fact Ms. Lynn has questions and we encourage her to utilize any of the patient reporting tools available on our website so we may work to investigate her concerns.”

Lynn is scheduled for a complete examination this week.