June 1 marks the start of the 2021 Atlantic basin hurricane season. Isaias was a category 1 hurricane that took the lives of 18 and caused billions of dollars of damage.  It was one of the most talked-about storms not for its devastation, but confusion on how to properly pronounce its name.  This year, there are a few curve balls, like Henri, which is pronounced like ahn-REE. Here’s a pronunciation guide for this year’s 2021 Atlantic Basin storm name list: 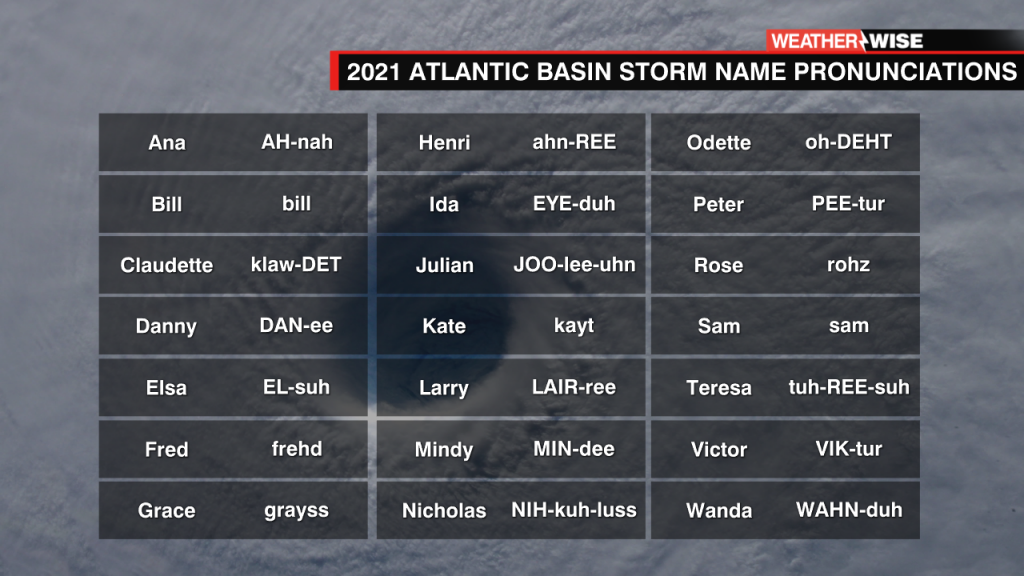 Hurricane season 2020 was historic with 30 named storms. As of May 2021, 14 of those storms became hurricanes. Gamma was upgraded to a Category 1 hurricane by researchers with the National Hurricane Center. It rapidly strengthened before landfall in the Yucatan Peninsula near Tulum on October 3, 2020, with a peak intensity of 75 mph.

Zeta was also upgraded by researchers in May to a major category 3 hurricane. It is the latest landfalling major hurricane on record in the U.S. The eyewall of Zeta moved directly over New Orleans on October 28, 2020. This storm also rapidly intensified right before landfall with peak winds of 115 mph. In total 7 major hurricanes were documented during the 2020 season.

The Greek alphabet will no longer be used as a secondary list during hurricane season. You can read more about the supplemental list here.

Although the 2021 season will likely not be as 2020, the National Hurricane Center is projecting a 60% chance of above-normal activity after coming out of a La Nina winter and entering a more neutral period. It only takes one storm to change your life. Make sure you follow the WCCB Weather Team for all updates this hurricane season by downloading the WCCB Weather App, powered by COIT.