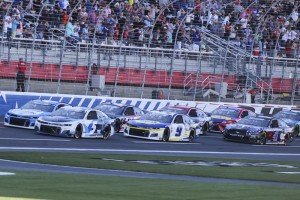 DAYTONA BEACH, Fla. – NASCAR was named Sports League of the Year during the 2021 Sports Business Awards, a virtual ceremony hosted by Sports Business Journal to celebrate the best in sports business over the past year.

The award, one of the most prestigious in the sports industry, recognizes NASCAR’s many successes and efforts during a historic and challenging 2020 season. Following the pandemic pause, NASCAR was the first major U.S. sport to return to competition, the first to safely welcome back fans and the first to complete a full season schedule.

In June 2020, NASCAR took a stand for equality and social justice and banned the confederate flag from all properties and events. The sanctioning body reinforced its commitment to diversity, equity and inclusion, and later welcomed Michael Jordan and Pitbull as new team owners.

NASCAR worked with industry stakeholders to build and introduce the most dynamic new race schedule in more than 50 years, including several new venues added to the 2021 slate of events.

NASCAR also filled the live sports void with esports following the onset of COVID-19, collaborating with FOX and iRacing to introduce the eNASCAR iRacing Pro Invitational Series. The new series generated six of the highest-rated esports programs in television history.

“We’re honored to be named 2021 Sports League of the Year and thank Sports Business Journal for this incredible recognition,” said Steve Phelps, President, NASCAR. “This award is a testament to the collective resolve and creativity of our industry as we worked through some extraordinary circumstances in 2020 and in the process led the way for live sports in our country.”

Joining NASCAR as finalists for the Sports League of the Year award were the NBA, NFL, NHL, PGA Tour, UFC and the WNBA. The win marks NASCAR’s first in the category for the Sports Business Awards.