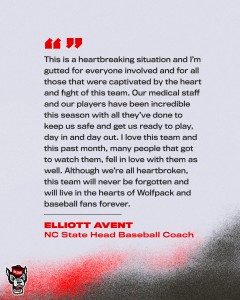 OMAHA, Neb. (AP) – Vanderbilt will advance to the College World Series finals after North Carolina State was forced to drop out because of COVID-19 protocols. That word from the NCAA. NC State had only 13 players available during its 3-1 loss to the Commodores on Friday.

The teams were scheduled to meet again Saturday afternoon in a winner-take-all Bracket 1 final. The NCAA Division I Baseball Committee declared that game a no-contest. The NCAA said the decision was based on the recommendation of the Championship Medical Team and the Douglas County Health Department.

NC State was missing four starting position players and had only 13 of its 27 players available for the Friday game.