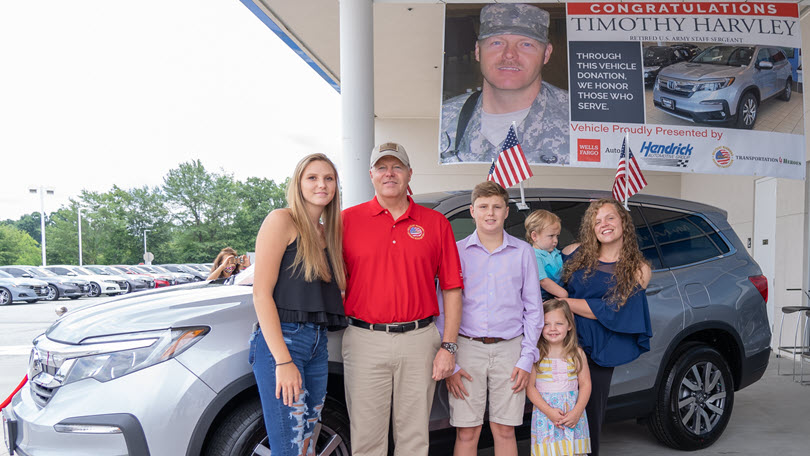 EASLEY, S.C. (News Release) – For combat-wounded veterans, transitioning from the military back to civilian life can be a challenge. That, combined with the cost of a new vehicle, can put added burdens on our nation’s military service members and their families. To help, Wells Fargo teamed up with Hendrick Automotive Group, Hendrick Honda of Easley and Military Warriors Support Foundation to present a payment-free 2021 Honda Pilot to retired U.S. Army Staff Sergeant Timothy Harvley during a special key ceremony Thursday, June 24, at the dealership.

“My family has a very active lifestyle. My children enjoy playing every sport in school and as a family, we love to going fishing and camping whenever we can. We enjoy spending time together, having cookouts, and making hash, stews, and soups. So, this vehicle will mean the world to us and allow us to drive to the beach in a truly dependable vehicle. We would typically rent a car to travel, but with this car, we won’t have to anymore.”

“I still can’t believe we were chosen to receive this generous donation. It will be such a blessing to me and my family,” shared retired U.S. Army Staff Sergeant Timothy Harvley.

The donation was made through Military Warriors Support Foundation’s Transportation4Heroes program, which awards payment-free vehicles and provides one year of family and financial mentorship to combat-wounded veterans and Gold Star families. According to the Foundation, the counseling has helped families in its program pay down on average, about $30,000 in debt.

Timothy Harvley joined the military in 1986 in hopes of bettering himself and serving the country he loved. As a member of the Army National Guard, he supported flood disaster relief during Hurricane Hugo in West Virginia and Honduras, as well as supported the U.S. Border Patrol in California. Throughout his military service, he was stationed in Albania; Annette Island, Alaska; Fort Dix, New Jersey, and many other places around the world. In 2005, while deployed to Iraq, Staff Sergeant Harvley was wounded in combat and later received a Purple Heart for wounds incurred in combat. After 22 years of service, Staff Sergeant Harvley was medically retired and received many awards for his bravery, including a Combat Action Badge, an Iraq Campaign Medal, a Global War on Terrorism Service Medal and more. Today, he lives in Hodges, South Carolina, with his family.

Wells Fargo Auto, a division of Wells Fargo Consumer Lending, started the Sponsored Vehicle Donation Program in 2015, and since then have worked with auto dealerships across the country to sponsor the donation of more than 50 payment-free vehicles and family and financial mentoring, valued at over $1.5 million, to combat-wounded veterans and Gold Star families through Military Warriors Support Foundation’s Transportation4Heroes program.