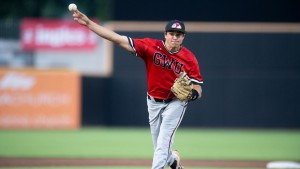 Miller led the Big South Conference and ranked 21st in the nation with 121 strikeouts, the second most in a single season by a Gardner-Webb pitcher.  His 11.75 strikeouts per nine innings ratio also ranks second for a single season in program history and his .210 opponent batting average tops the all-time GWU listing.

Miller was a 2021 Big South All-Conference First Team selection and was named to the 2021 ABCA/Rawlings Division I Atlantic All-Region Second Team and is the first Runnin’ Bulldog to be drafted by the Athletics.