LENOIR, N.C. — A 48-year-old man has been charged after a victim was sent to the hospital following a shooting in front of the Caldwell Count Courthouse in Lenoir Monday morning.

The Lenoir Police Department responded to the courthouse, located on North Main Street, around 10:50 a.m. after reports of a shooting. Upon arrival, a victim, identified as 35-year-old Travis Lee Webb, was found suffering from gunshot wounds to his upper body. He was transported to a local hospital with life-threatening injuries, according to police.

Following an initial investigation, Chad James Emke was identified as the suspect in the shooting by police. It was revealed that Emke and a 10-year-old boy occupied a vehicle in the roadway in front of the courthouse and at some point Webb approached the vehicle leading to a verbal altercation. Emke then drew a 9mm semi automatic pistol and shot Webb in the upper body twice, according to a news release. 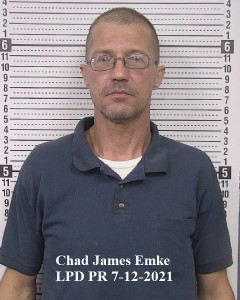 Emke was taken into custody at the scene by Law Enforcement and following being questioned was charged with assault with a deadly weapon with intent to kill inflicting serious injury and child endangerment.

It was discovered that Emke had a scheduled court appearance at the Caldwell County Courthouse for custody related issues Monday. Both Emke and Webb knew each other prior to the incident. The boy was not physically harmed during this incident.

Anyone with information relating to this or any other crime is asked to contact the Lenoir/Caldwell County Crime Stoppers at 828-758-8300 or the Lenoir Police Department at 828-757-2100.