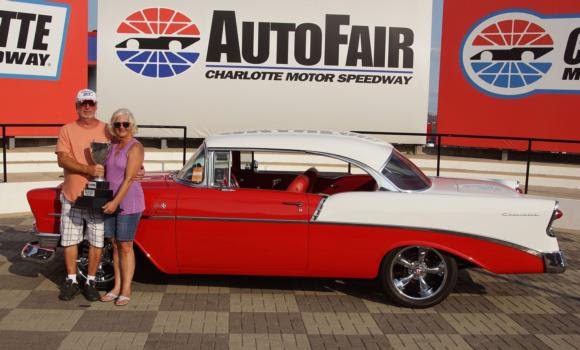 CONCORD, N.C. (News Release) – Twenty-five years ago, when Randy and Vickie Conrad purchased their 1956 Chevy 210 Hard Top, it needed a lot of work. The car was towed home on a rollback, but most of the parts for it traveled in the bed of Randy’s pickup truck. But Saturday, the car that the couple transformed into a masterful blend of traditional style with a few updated creature comforts, was named the 2021 Charlotte Fall AutoFair’s Walt Hollifield Best of Show winner.

“It’s a California frame 210 Hard Top, which is very rare,” Randy said. “I didn’t know it at the time; I was just looking for a ’55, ’56 or ’57 Chevy. When we were looking for parts, I called Classic Chevy International down in Florida and they said, ‘you might want to think about what you’re going to do with that car because – versus the Bel Air – we get about five calls a year on this car. The Bel Air we get thousands.’ That’s how we ended up with it.”

Over the course of four to five years, the Conrads worked together to bring the life back to the machine, which had been modified to run as a dragster. It was a labor of love.

Winning the Walt Hollifield Best of Show trophy came as a surprise to the Iron Station, North Carolina couple.

“Never in a million years,” Vickie said. “We know that there are a lot of cars out here that have spent a lot of money – like on paint jobs. We kept it simple. The same paint job that was on it 25 years ago.”

“We’ve come here for the better part of 25 years – in the spring and in the fall,” Randy said of AutoFair. “The speedway’s been good to us – a lot of good experiences. You made a big memory today.”

“It’s going to be hard to go to sleep tonight,” Vickie added.

The Best of Show award was named for Charlotte-area car expert Walt Hollifield, who has been a valuable part of AutoFair for 40 years. Hollifield presented his eponymous award to the Conrads in winner’s circle.

Three days of family-friendly fun and glistening cars throughout Charlotte’s 1.5-mile superspeedway also included drift car rides and displays saluting iconic cars of the silver screen including the Monkeemobile and a screen-used Dodge Charger from the original “The Fast and the Furious” movie. Guests were also treated to rousing 9/11 tributes to mark the 20th anniversary.

TICKETS:
Fans can purchase tickets to upcoming speedway events including next weekend’s DEWALT NHRA Carolina Nationals and the Oct. 9-10 Bank of America ROVAL™ 400 weekend online or by calling 1-800-455-FANS (3267)