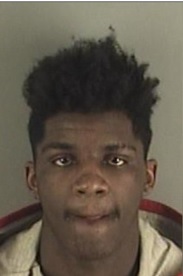 The suspect accused of fatally shooting a 14-year-old in downtown Gastonia Tuesday afternoon is now in police custody, according to the Gastonia Police Department.

Investigators have identified 19-year-old Santonio Azanier Eskridge as the suspect in the homicide case of Nivia Danner, the identified victim, who was shot outside a North Chester Street business.

Detectives have obtained arrest warrants for Eskridge charging him with second-degree murder and possession of a firearm by felon.

Senior Pastor of Destiny Church in Gastonia David Tucker released a statement about Nivia, who was a member of the church family:

“Our hearts are heavy as we mourn the loss of one of our very own youth members, Nivia Danner. Nivia was a joyful young lady who had the biggest smile. She loved to sing, and participate in youth events and functions.

Our youth leaders reminded me of how full of ‘personality’ and ‘life’ that she was.  Nivia would be sure to enter every church service and youth function with hugs and a big smile. Anytime there was a special event, she made sure to ask how she could help. She was truly an encouragement to our youth leaders, and to all who came in contact with her.

Our prayers go out to her family during this difficult time as we hold onto the hope of comfort, in Jesus Christ, while acknowledging that we are not promised tomorrow.”

Detectives continue to ask anyone with any information regarding this investigation to please call investigators at 704-854-6651.

GASTONIA, N.C. — A 14-year-old girl was shot and killed in Gastonia Tuesday afternoon, sparking a homicide investigation, according to the Gastonia Police Department.

Officers responded to North Chester Street, off of North York Street, around 1:20 p.m. after a report of a medical emergency in the area. Upon arrival, they found a 14-year-old victim suffering from a gunshot wound.

The victim was transported to the hospital where she was pronounced dead due to her injuries, police said.

According to the police department, the suspect vehicle was seen leaving the area in a 2013 or 2014 white Chevrolet Impala with temporary plates with a dent on the left rear bumper.

Detectives believe this was an isolated incident.

Shooting now investigated as a homicide.

The victim succumbed to her injuries at the hospital.

Detectives believe that this is an isolated incident.