Detectives have located and arrested John Jandrew and Tiffany Trull for their involvement in a Rowan County shooting .

Detectives say two suspects have been arrested and two are still wanted for their involvement in a Rowan County shooting that left Juan Gomez critically injured.

Michael White and his wife, Jennifer Tucker, have both been arrested for hindering the investigation and helping the suspected shooter, Jandrew, according to a news release.

Police say both are charged with felony obstruction of justice, and Michael White faces an additional charge of altering and destroying evidence in this case.

Both individuals provided misleading evidence to investigators and Michael White, who lives at the home where the incident took place, concealed video footage taken from his home security system, according to a news release.

Police say that video captured the shooting and after learning of the video evidence, a search warrant was executed at White’s home on December 20th.

As a result, investigators recovered a recording of the footage from Michael White’s phone.

Detectives are also searching for Jandrew’s girlfriend for her alleged involvement in the shooting.

Tiffany Trull is wanted for accessory after the fact of a felony and felony obstruction of justice, according to a news release.

Police say Trull was found to have driven Jandrew to the home where Gomez was shot, and then taking Jandrew away from the scene to elude arrest.

Rowan County Detectives are actively seeking information that will help in the arrest of Trull and Jandrew.

Jandrew is considered armed and dangerous. He is described as a 33-year-old White man, 6 feet 2 inches, 250 pounds with blue eyes and blonde hair. He has a large tattoo on his back that says “JUNKYARD DOG.” He also sports a Grim Reaper tattoo on his left upper arm and a Joker’s Wild tattoo on his right upper arm.

Trull is described as a 33-year-old White woman, 5 feet inches, with brown hair and brown eyes.

ROCKWELL, N.C. — Deputies are searching for a suspect after he shot and critically injured a man Friday evening in Rowan County.

Deputies say the say the victim, 32-year-old Juan Gomez, was taken to a local hospital in critical condition following the shooting on Carter Loop Road around 6 p.m.

Police say Gomez was found to be suffering from a shotgun wound.

After an over-night investigation, detectives identified the suspect in the shooting as John Jandrew of Mount Pleasant. 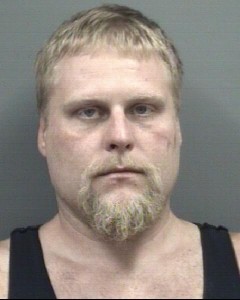 Jandrew is currently out on bond for similar charges stemming from an incident also investigated by the Rowan County Sheriff’s Office in July of this year, according to a news release.

Police have issued a warrant for his arrest for Assault With a Deadly Weapon with Intent to Kill Inflicting Serious Injury.

Jandrew is considered armed and dangerous, and police say he should be approached with caution.

Anyone with information on this incident or Jandrew’s whereabouts is asked to call Detective Travis Allen at 704-216-8715 or Seargeant David Earnhardt at 704-216-8741.